This season of The Texas Bucket List was full of meaty Texas treats from all over the state. After a season with as many good burgers as this one held, it’s hard to crown just one as the burger of the season. With great deliberation, we’ve finally reached a delicious verdict to produce the top five burgers from the Spring 2017 season. (Click the images or red links below to watch videos about each of our top five burgers.)

Burger #5 The Terlingua Burger at Tolbert’s in Grapevine

With a little connection to the Terlingua Chili Cook Off, it’s no surprise that Tolbert’s in Grapevine serves up one heck of a chili burger. The patty on this Texas treat is seasoned to perfection with Terlingua seasoning, but the real secret to the success of this burger is the Terlingua chili. Grated cheddar cheese, onions, and a brioche bun finish off this Texas chili burger gem that sends our taste buds soaring. 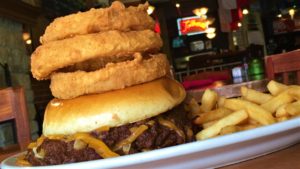 The Terlingua Burger at Tolbert’s

Burger #4 The Cover Burger at Alamo Spring Cafe in Fredericksburg

You wouldn’t be exaggerating if you called The Alamo Springs Café a burger oasis. Known for it’s great grub, this burger joint serves up a burger known as the cover burger because it has been featured on the cover of a prominent Texas magazine. While the burger’s obviously pretty to look at, we’re here to tell you it’s just as fun to eat. This cheese burger is made with a half-pound patty, jalapeno cheese bun, grilled onions, avocado, and green chili. 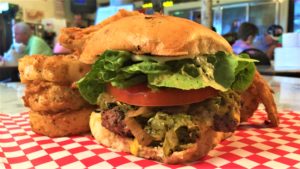 Our third place burger is served up with a side of small town Texas hospitality that can’t be beat at The Kenney Store in Kenney. Their spinach and artichoke burger may not be something you’d expect to find on their menu, but it has a flavor that sent our taste buds over the moon. Made with a secretly seasoned patty, house made spinach and artichoke dip, Parmesan cheese, and the traditional burger toppings this burger is truly a unique Texas burger gem. 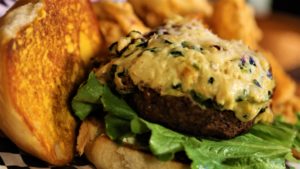 Spinach and Artichoke Burger at The Kenney Store

Since 1986 Wingfield’s in Dallas has been serving up some of the best old fashioned burgers in the Lone Star State. Mr. Wingfield, a former biology teacher and co-owner of Wingfield’s, has developed a cooking method that Wingfield’s employees have down to a science. This huge burgers are made with giant seasoned patties, delicious cheese, onions, mayo, exactly six or seven pickles, two slices of tomato, flattop fried bacon, and a 429 bun. We’ve dissected a lot of burgers on The Texas Bucket List, and this one is well worth the stop. 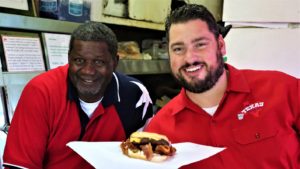 With a magical mixture of meat, Captain Billy Whizzbang’s Whizz-pig burger finds itself at the top of our list. This Waco eatery has been serving up meaty treats since 1977, and is still using the same grill to make some of the best burgers in Texas. So, what is this magical meaty mixture made of? House ground bacon and fresh beef! Typical bacon burgers require you to search for that bacon flavor, but with the whizz-pig it’s in every single bite. Served on a sesame bun with mayo, mustard, pickles, lettuce, onions, special Whizzbang sauce and tomatoes, this burger is truly something worth squealing about. 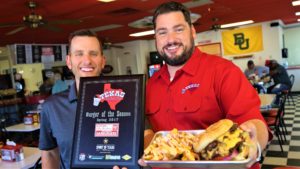