Oh there’s no place like home for the holidays, especially when home is in the Lone-Star State! With world famous holiday themed eats, festivals, light displays, and hotels unique to Texas, there’s a little something to get everyone in the yuletide spirit. The places, experiences, and treats featured in this list will have you saying merry Texas Christmas in no time! 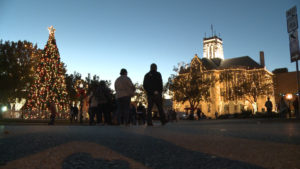 The lights in downtown New Braunfels shine like a beacon for Santa on the first Thursday of December, but the real treat here is the old world wonder boiled up by the folks in this part of the Lone-Star State at Wassailfest. Downtown New Braunfuls has been the place to taste this Christmas tradition since 1992. Some wassails are more spirited than others at this event featuring good food, award winning wassails, and family fun.

During the second week in December, you’ve got to mossy on to Tomball. Here, you’ll find a huge Christmas market that’s been bringing together Christmas cheer and the German tradition of Oktoberfest since the 90s. Festivities kick off with a huge parade in which an official Christmas keg tapping is the grand finally. This Christmas celebration is also a cultural celebration; a chance to raise a glass to one of the many nationalities that has made Texas what it is today. 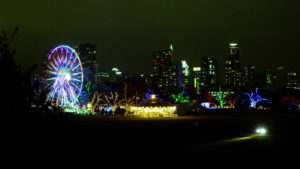 This trail of lights has been burning bright since 1965 in the capital of the Lone-Star State. The Lights that line Lou Neff Road become a beacon of Christmas spirit in the live music capital of the world each December. With 2 million lights and 41 displays dedicated to the season, you’ll find some story time favorites, Texas themed treasures, religious displays showing the true meaning of Christmas, and far out favorites that represent what Austin is all about. However, the crown jewel of this trail just might surprise you.

Nobody celebrates Christmas quite like the Gaylord Texan Resort in the Christmas capital of the Lone-Star State. Over half a million visitors visit the Gaylord during the seven weeks that make up the holiday season to experience their take on a Lone-Star Christmas. No corner of the 125 acre Christmas themed paradise is untouched by the holiday spirit thanks to a talented group of artists who hand make each and every piece of decor. A snow slide, 14,000 foot ice exhibit kept at a wintry nine degrees, and a life size nativity scene made out of ice prove that everything really is bigger in Texas, even Christmas.

Oh what fun it is to ride to the Collin Street Bakery for some holiday delights. This little bakery in Corsicana, Texas works year round baking up a Christmas treat that’s not just a tradition in the Lone-Star State, but all over the world. Since 1896, the bakery has been getting a rise out of customers with their world famous fruitcakes. A product of the fall harvest, the one million fruitcakes sold by the Collin Street Bakery each year feature pecans, pineapple, cherries, and raisins.

When the lights come on along the San Antonio Riverwalk, Christmas has officially begun. This light display, that is truly unique to Texas, has been spreading the joy of the season since the late 60s when the Riverwalk was built. Lights start being hung strategically during the first week in September on more than 180 trees. The grand total of strands in this display is 1,687, that’s over 21 miles of illumination. The Mexican tradition of luminárias, lit candles in sand filled bags intended to light the way for the Holy family, add to the magic.

Dickens on the Strand – Galveston, Texas

For more than 40 years, Dickens on the Strand has provided a unique Christmas experience to Texans and world travelers alike. Thousands of Charels Dickens fans make their way to Galveston to experience Christmas as it appears in the famous English author’s work. Costumes, historical buildings, and activities all fit the time in which Dickens’ “A Christmas Carol” would have taken place. Galveston’s design, which parallels London during the Victorian period, makes it the perfect place to pay homage to a beloved author and his classic Christmas tale.

Watch now: Dickens on the Strand

Each December hundreds of people voyage to south College Station to visit a Texas Christmas village known as Santa’s Wonderland. Millions of twinkling lights highlight what it’s like to celebrate Christmas with a Lone-Star State twist. Sprawling across 37 acres, this park has it’s own town, Santa’s Town, dedicated to the season. Sweet treats, savory eats, holiday gift shops, live music, Marshal Frostbite, a petting zoo, fine wine, fires to warm up with and cook s’mores on, and Texas Santa himself can all be found in Santa’s Town each and every night. It’s a true Texas Christmas experience.