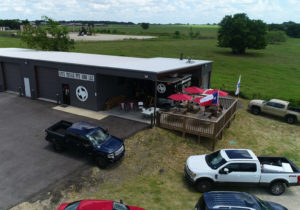 o is a bodacious BBQ joint that we just can’t keep secret any longer. It’s down by the Brazos River, but it’s not a van, it’s a trailer, and it’s called 1775.

1775 opened in 2017 but for owner Brad Doan, barbecue has been his business for life. He grew up in the Brazos Valley watching his dad work the grill and eating his mom’s delicious sides, so authentic barbecue is in his blood. “Growing up, my dad always had a charcoal grill, gas grills, and a smoker too”, he reminisced. “A lot of my friends growing up would always come to our house because we always ate good.”

He eventually joined the Army and spent three years stationed in Korea.  Although he enjoyed his time serving, afterwards Brad was ready to come home and get back to doing what he loves most, firing up the grill and working barbecues. He spent a few years helping launch a statewide BBQ restaurant brand, but ultimately, he decided he wanted to come home and build his own business in College Station. 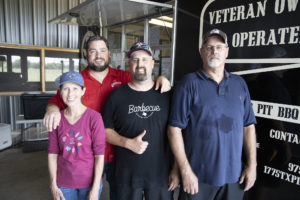 Being a Texas BBQ joint, a lot of folks try to figure out what happened in Texas back in 1775.  Turns out the year 1775 is the birth year of the U.S. Army.  Brad wanted to give a subtle nod to his former branch of service so he named it 1775. Brad runs the place with the help of his mom, Belinda, and his dad, Mark. “There’s nothing like working with your family”, Brad said. “You really appreciate having them here on Earth and being able to see them each day and have them at your business”. 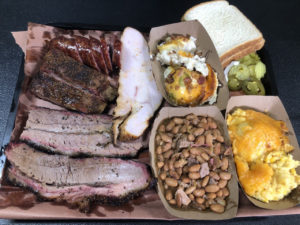 1775 Texas Pit BBQ offers a wide array of signature meats and sides, many of which we sampled during our visit. We started with a deliciously smoky turkey, moved on to a course of sausage, got our hands dirty with a rack of Duroc ribs, and finished off with a beautiful cut of brisket. Their loaded mashed potatoes and cornbread casserole made for the perfect sides to our truly Texas feast.  Trust me on the cornbread casserole.

After all of our Texas traveling, we know one thing is for sure. No matter where you go in this great state, you can always find good barbecue, but every once in a while you find something extra special and that’s what we found at 1775. .