Over in Amarillo there’s a place for adults to get a to-go drink that really lifts off your engines for an evening out.  It’s called Rocket Brews, and when it comes to big, bold, boisterous drinks, they take things into another orbit. 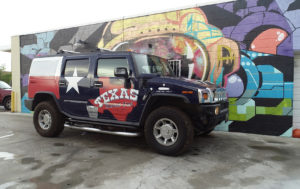 Along the old Route 66 in Amarillo you’ll find a new way to get you kicks and I’m not talking about taking the highway that’s the best, it’s more like shooting off into space.

“I see why you call it Rocket Brews,” I said after taking a sip of the seriously stout drink.  “Yes, sir,” laughed co-owner Alex Morales.

Alex and his good friend Jesse Murguia grew up in Amarillo but took different career paths in life.  Alex is an occupational therapist while Jesse is a schoolteacher and when these two shared a dream of owning their own business, they knew they had to follow their own advice and shoot for the moon.

“Everyday I will tell them follow your dreams,” said Alex, refering to his job as a teacher.  “Do what you want to do and stuff. And it kind of got me to thinking maybe I should do the same, you know? And maybe one day I’ll go back to teaching, but for now we’re pursuing our dreams. Both of us,” he said.

“The elderly folks, they say minimize all your regrets by the time you’re 80 so you can die peacefully. Because they’d be like, ‘You know what, I wanted to go to Italy. Never got to it. Now I regret it,” said Jesse.

The two started a restaurant that required 19-hour days and didn’t amount the success they had hoped to have, so they decided to open something a bit more unique.  A drive through daiquiri dispensary that also dished out some mighty micheladas and crazy party trays.

I’m assuming there’s nowhere else in Amarillo like this place. “Not like us,” said Jesse. Yeah, you kind of cornered the market up here. “Yeah,” he said with a smile.

Rocket Brews is all about making some of the most bizarre but bodacious bebidas in the bomb city.

“We’re simply the best michelada,” said Jesse proudly.  Saying you’re the best michelada in Texas, man, them fighting words.  “In this mighty state of Texas. I’m a proud Texan, and it’s a big state, you know? But I’m willing to compete with anybody for micheladas,” he stated.

They start their recipe off with a signature michelada mix, add some cold beer, and then move on to the toppings. Peanuts, cucumber, beef jerky, hot Cheetos, celery, and shrimp are put in a cup on top of the drink. Top it off with a little tahini for kick, and you’re ready to toast to Texas with the most gourmet michelada I’ve ever seen.  The taste was terrific as well, the perfect blend of spicy tomato juice with just the right spice. 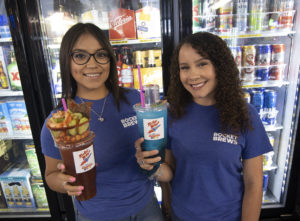 We promptly had to cool things down so the next thing we tried, “This is the craziest daiquiri we make”, said Alex.  Comprised of their secret daiquiri mix, rainbow candy, and cherries topped off with an energy drink and, yep, even more rainbow candy toppings. It’s truly a daiquiri with some rakakaka. At a whopping 17% alcohol, this drink, and all others offered at Rocket Brews, are bagged up for the road to be consumed safely once you reach your evening destination.

Supplying some leaded gasoline on Route 66,” I said after a small sip.  “There you go. Exactly. In old Amarillo, Texas,” joked Jesse. “You give me a daiquiri that’s 17% alcohol, you never know what’s going to come out of my mouth,” I let him know.

And to close out our orbit around Amarillo, the party tray. Offering six cold beers in a tray topped with chamoy, tajin, jerky, cucumbers, and cocktail shrimp.  This is what they need at baseball games. 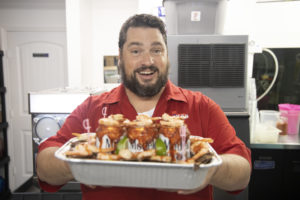 So if you’re in Amarillo looking for an out of this world experience with elixirs, Rocket Brews is well worth a stop on The Texas Bucket List.

“A lot of people always say there’s nothing to do in Amarillo. There’s nowhere to go. And I decided to stay in Amarillo, and we want to make a difference,” said Jesse.