The Texas Bucket List – The Chairy Orchard in Denton 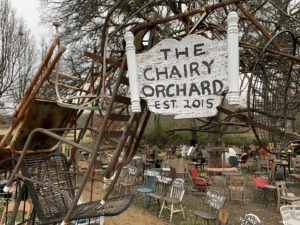 Thanks to a collection of colleges and an eclectic feel, Denton, Texas has been called a mini Austin of sorts and the stop we found fits right in.   Along the banks of Copper Creek on the city’s northeast side is a chairy orchard but we’re not talking delicious fruit, this chairy orchard pulls the seat out from under ya.  Turns out it’s field full of chairs!

“A lot of them think it’s cherries. They’ll say, ‘Where are the cherry trees?'”, joked Anne Pearson.

Pearson and her friend Judy Smith got my hopes up about my favorite fruit, fortunately I was able to find a seat to hear them tell me about the quirky collection that initially got folks thinking they were off their rocker.

Friends since 1973, the two met in the meadow that happens to be in the middle of their two homes.

“So you guys always had this space between you?”, I asked. “Yes. Yeah. Always”, they said. “Our kids built forts in that tree and we had soccer games happen out here, I mean our kids are older than you. My son is going to be 58. What can I say? You’re almost the age of our grandchildren”, the two explained.

I was on the edge of my seat to hear what the family thought of their little business!

“At first my kids were like, “Oh, mother, you have always embarrassed me, But this is it. … but now,  their like, “Oh, I’ll help you do this and help you do that”, Judy explained. “They’ve seen it be a success?” I asked. “Yeah. “And I think they’re proud of us now”..

“What has your relationship been like over those years?” I asked. “We’ve never had an issue. We’ve traveled together”, Anne reminisced.

The two hang out everyday, despite the fact that Ann still works. 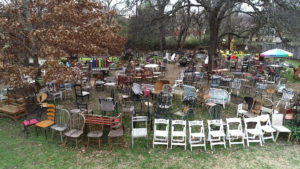 The way I see it, you two decided to put two chairs out here, you were drinking some wine and you said, “Let’s just leave the chairs out there.” Is that what happened? “No”, Anne corrected. “Judy had chairs hanging in the tree and then we were at work one day and said, ‘Well, why don’t we put some on the ground?’ We call that the Chairy Tree”.

That’s when it grew, and grew and grew.

Where do all these chairs come from? “Garage sales. Thrift stores. Dumpsters. Dumpsters. Curbs.  Yeah. And people donate. Sometimes- Sometimes. … not very often. People come and think they can take a chair. But no, it’s not like that”, Judy said. 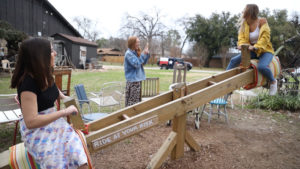 Red chairs, blue chairs, black chairs, old chairs, new chairs.  One has a little star, man what a lot of chairs there are.

“People have said, there’s an aura here. Now some people don’t get it, but some people really feel like it”, Judy explained. “Every one of these chairs was chosen by somebody, by a family. It has a history. They were in a kitchen, they were in somebody’s dining room, they were in their bedroom. They all had a previous life. And now we’ve brought them here”.

The imagination and humor these two can put together makes meeting them a worth while stop on The Texas Bucket List, heck they even have titles!

“We’re the Chairy Fairies, but also lately we’ve been calling ourselves the Chairwomen too”, Judy said excitedly. “You all are the boss”, I joked. “We are! We’re really tough!” they joked back. 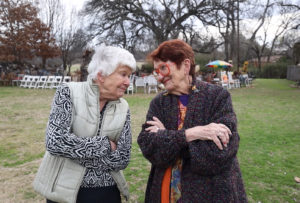 Don’t let them fool you.  Seeing the smiles and hearing the laughter while people play musical chairs around the chairy orchard is what they consider the best seat in the house.

Is that the best part for you guys? Just seeing people come here and smile. “It is! Oh yes! Because, we don’t know they’re coming. It’s all a surprise.  We come out, we, it’s really fun to talk to them because- To see why they came. They don’t understand why, why is this here? They say Dallas would never allow this Fort Worth, Austin would never. We checked before. Would never allow this”, they explained.

“Why do you think it speaks to people? Why do you think people find it so amusing?”, I asked. “Because it’s just silly. It’s so unusual. There is- It has no reason.” Anne laughed.

But there is a reason, their friendship is the reason.  Taking the time to sit down and enjoy one another helps bring a light hearted look not only into their lives but others as well. 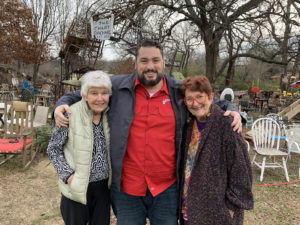 Well, what would you guys do without each other? “I think my life would not be nearly as fun. We have a lot of fun. Sometimes people have asked, if, “Say, haven’t you ever had a fight?” And I said, “No, not really.”  And I can tell you one thing that why it works, Ann will probably agree. If Ann doesn’t want to do something that I do, we don’t do it. We both have to agree”, Judy said.

After being friends for 45 years, these guys have figured it out.

“I think my life would be half empty if it weren’t for her. Because we do so much together. We do. You know, she- It’s just the best. It’s just wonderful to have a good friend. Yeah. A lot of people don’t. You don’t need 10 good friends. No. You need one or two good friends. We just have a good time”, they said.