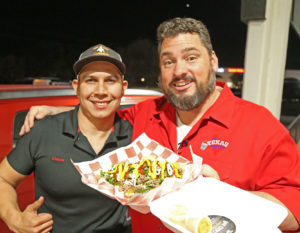 For the last 15 years Vincente, or Don, has worked in San Antonio as a sales man at a sausage company and his side gig happens to be slinging those sausages with some serious toppings.  Everyone knows me for my hot dogs. They’re Mexican, 100% hot dogs, and unique,” said Vincente.“They’re unique because nobody here in San Antonio offers them,” commented Alex. But these frankfurters garnished with a gargantuan amount of toppings don’t file as hot dogs.

“[They’re called] jochos. It’s a Mexican nickname for part of the Nuevo Leon in Coahuila. Some people…say jocho or hot dog… It’s a Mexican hot dog,” explained Vincente.  And at Don Chente’s it is all about donning the dogs with diverse things. Like the Mexican hot dog known as the Jocho Vaquero. It all begins with a toasted bun and a hot dog wrapped in bacon. “We put asada meat, cilantro, grilled onion, bacon, cheese, jalapeno on the side, mayo, mustard, ketchup, chili dog,” listed Vincente. Say no more, we’re ready for hot dog happy hour! 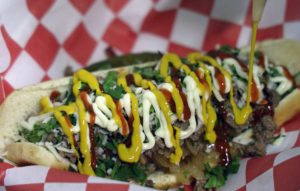 “This is next level stuff,” claimed customer, Meagan.

The mix of flavors on this hot dog are ridiculous. You get a little bit of that carne asada along with the bacon and the hotdog. Your mind doesn’t know what to do, but for some reason, it all works and it’s pretty darn delicious.

“They’re very unique. It’s different than some of the stuff around here. That’s why a lot of people like to come over here because they can taste different stuff,” added Emilio.
“In the end, it just melds perfectly together,” concluded Meagan.

Well, if you’re looking for one extreme hot dog with a hefty amount of toppings, come in on over to Jocho’s Don Chente on the West side of San Antonio. Well worth a stop on The Texas Bucket List.