Sulphur Springs— Along Main Street in Sulphur Springs sits a house. It’s home to Bob Casey, but to find Bob, you’ll have to go way in the back, to old dairy barn to spot the aging artisan.
Well into his 80’s, Bob is fighting father time to keep his craft of acoustic guitars alive and well. “I’ll be what, 83 this coming August. And I feel every one of them,” said Bob. These pieces of wood come together to make a beautiful sound and that sweet serenade of strings provides the tempo that keeps him ticking. “I’m still down here, and I’m still kicking. I just don’t kick as hard as I used to,” he added. 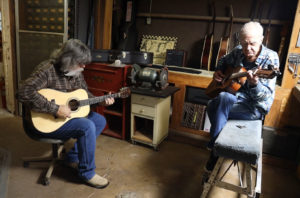 Since 1989, Bob has been building these guitars that have a long linage and it all starts with Stuart Mossman. “I did not design a guitar. Stuart Mossman did. I’m a good mechanic,” explained Bob.
Mossman guitars became popular in the 70’s when they found their way into the arms of artists like John Denver, Cat Stevens, and Emmylou Harris. Health problems forced Stuart to sell and the name was eventually bought by Bob. “I have no earthly idea [why]. It seemed like the thing to do at the time,” said Bob on his reasoning for purchasing Mossman Guitars.
Mossman saw Bob’s work and was impressed. 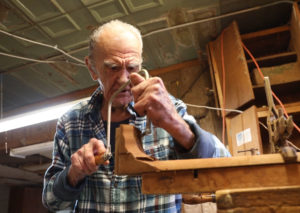 “He [Stuart Mossman] said ‘My name is still on the headstock…You have my approval… I’m very satisfied with what I was seeing,’ and it kind of meant something to me to think about that kind of had his endorsement,” recounted Bob. Mossman passed away in 1999 so Bob keeps his spirit alive one guitar at a time. Now musicians like Red Steagall and Clay Walker have joined the ranks of Mossman pickers. “Stuart did some things that really kind of… Didn’t revolutionize the building of acoustic guitars, but he made a mark,” he concluded.

An accident with a table saw hindered Bob’s ability to keep up pace when putting together guitars, so he enlisted the help of Mike Austell to fill in on rhythm. “Bob and I are kind of like old souls, just separated by a few years,” said Mike.  Mike was seeking out the superior sound of perfection and fate pointed him to Sulphur Springs. “I was on the quest for the acoustic guitar. Somebody told me…’Oh, you need to go up to Sulfur Springs…There’s these guys making these guitars in a dairy barn up there…They’re just killer guitars.’ And I thought, ‘Yeah, yeah, yeah,’” he said.
Mike was marveled at the melody that made its way out of a Mossman.  “It was kind of like a drug. It was addictive. I couldn’t get enough…I had played some Mossmans here that were better than other Mossmans, but I’ve never played a bad one,” claimed Mike.

It’s not all about picking away. Mike is doing his best to learn the craft from Bob so that Mossman Guitars can continue to make music. “There’s a lot to be said for hands-on experience, and I will have a long way to go before I can be a Bobby Casey, if ever, but I would certainly like to try…He’s the world’s best mechanic. He knows all the tricks. He knows all the, ‘It’s doing this, so I’ll finesse it this way or finesse it that way and make it work.’ And if it won’t work, he throws it away and starts over. He won’t settle for less,” he explained. 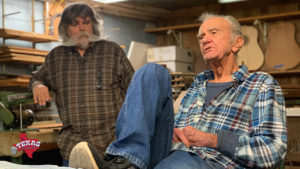 In every scrape of the wood, Bob seeks the guitar within it. A much different process from the machined mass-produced guitar most musicians end up with. “If you’re looking for a good quality, handmade instrument that wasn’t laser cut, punched out by a computer, set up in an air jig press, and part of it was made here, and part of it was made there, and it was manufactured, and it was put together. It’s a great guitar, but it has no soul,” said Mike.

It seems these instruments are full of life. Breathing, talking, and evoking emotion. “My mother’s eyes light up when I play her an old Kentucky song on a Mossman Guitar,” continued Mike, “And then I think the reason mom’s smiling is Bobby Casey built this guitar.” Bob stays humble through all this, just picking away or chipping away depending on his mood. But when he does get a chance to enjoy the fruits of his labor, Bob knows he’s hitting all the right cords. “I’ve been pretty successful I guess about making some type of living most of my life without ever having to do a legitimate job,” said Bob. “Here’s something that somebody did that’s touching not only one person, but a lot of people and making an impact…If I’m hopefully able to continue this in the proper manner and continue this line down the road, hopefully it’ll touch a few more lives,” concluded Mike.