The Texas Bucket List – The Beehive Restaurant and Saloon in Albany

Albany—Albany, Texas is well known for its annual summer tradition of the Fort Griffin Fandagle and the Fort itself, but if you’re looking for a place to get a bite to eat in town, just buzz on in to the Beehive for some of the best steaks in the state. Housed in the old Beehive Saloon and the Fort Griffin General Merchandise store, the restaurant has that old school Lone Star State feel with an owner who was raised on the other side of the world. Ali Esfandiary grew up in Iran and he doesn’t mess around when it comes to cooking a good meal. “I promise you, you go check other restaurant for shish kebab, you never find one [like] I serve you tonight. You’re going to go, ‘Whoa!’” remarked Ali.

Ali and his brother Nariman started this steakhouse with a serious reputation way back in 1982. “I told my brother, you can run a bar. I mean, my wife run a bar. You run a dining room and run the kitchen with my two kids,” continued Ali, “That’s all we were. We started it. Which was very difficult.” Ali’s first test when it came to his new Texas restaurant, making one of our state’s favorite dishes. “’Can you make a chicken fried steak?’ I’ve never heard that. I worked in a French restaurant during college. I’ve never heard of chicken fried steak… [but] I say, ‘Yes sir. I make the best chicken fried steak you ever had.’ And he said, ‘Do you know how to make a gravy?’ I said, ‘Oh, gravy come with it. Yes, I make the best gravy.” His can-do attitude prevailed. “I told my brother, ‘It’s a piece of cake, man. I can do it. No problem,’” said Ali. “Oh my God, first day we open, 56 chicken fried steak we sold and I am in the kitchen all day with the little hammer. By the time I finish at two o’clock I had meat all over me, all over the table and I walked to my brother. I said, ‘I cannot do that every day.’ “We are very famous for our chicken fried steak now… I didn’t have no idea how to make it, but I made the best one,” laughed Ali.

While Ali has grown older, his affection for life lights up a room. “Another day above the ground is a blessing. People ask me, ‘How are you?’ I always say…’I don’t got a tags on my toes, I’m good,’” he said. Being from a faraway country, folks were a little unsure of this fast talker and his family at first. “It was very hard. Yes, of course, thank God I learned chicken fried steak and that was my success and after that the people come and tried it,” he explained. He continues serving Albany delicious food and charming hospitality alongside his daughter, Jessica. 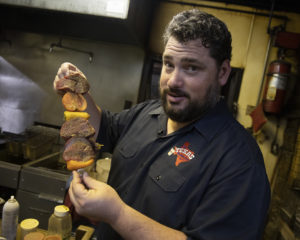 Ali brings his best when it comes to beef. Cooking succulent sirloins, fine filet mignons, and ribeye cooked just right over a bed of mesquite charcoal.
“We get it. Our steaks are phenomenal, we know,” joked Jessica. She continued her thought on a more serious note, “Not that we’re cocky or anything, but we’re very proud and we should be because it is [true]. We pride ourselves on that.”

“It makes my night when I go to the table they said, ‘Oh my God, Ali, what did you do to this? It’s awesome.’ And when I pick up the plate, they grabbing the bread, cleaning the bottom of the sauce to taste and I’m going, ‘I did good,’” commented Ali. “Some of those plates, I don’t have to wash… I just put the food on and serve it again!” he joked.

While growing up in Iran life was a lot different. Ali’s father was adamant about passing on the American way of life to his children.  “He came to America a lot of times. That’s why he wants us to come to America. He saw the country land of opportunity, said you guys got to move to America,” he explained.  In 1968, Ali made the move but his relocation was more of an escape plan.
“When my father kicked me out of the, not house, the country, when I graduate from high school,” said Ali. “He wants me to get out because my father was very close to the Shah. Shah told my father, get your family out. When I left my country, in the airport I was saying goodbye to my mom and my father, God bless their soul. I said, ‘Dad you’re a Muslim. Mama is a Catholic. What am I?’ He said, ‘Son, don’t cheat, don’t lie, don’t steal. If you can help, help as much as you can and believe one God. All this religion, if you put it together is one God, and that’s all you have to do…’ I stuck with it since then.” 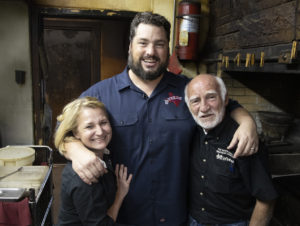 It took 10 years for his whole family to immigrate to the US and Ali embraced his new country and even served in the US Airforce.  “I love this country. I don’t know why not. How could you not love this country? Land of opportunity. Look at me. Didn’t have a dime in my pocket. Now look what I got,” he expressed.  Ali’s passion for the American dream is passed along in the passion for his food and the hospitality you receive when you walk in the door. “We want you to feel happy, we want you to feel euphoric. We want you to feel all these things. We want you to feel welcomed,” said Jessica. “They make you money. They come see you, so you better appreciate their business 10 times more than how much money you make. You should welcome them 10 times more,” said Ali.

Robert Duval is a regular, so is George Strait, and it’s not the million-dollar wall in the saloon that brings them into the Beehive. It’s the food and way Ali treats his guests– his constant care and attention detail. Ali is proof that hard work really does payoff. “God bless America. I’m telling you, man, you won’t believe it, in my heart how much I love this country. That’s why I did my four years service. I did my duty and raised four kids for this country on my cost. I don’t know what else to do. If they let me know I will do it, I have no problem. That’s all it is. It’s the greatest land of opportunity in the whole world, my friend,” concluded Ali. “I love it, man. I love it. I am tired, but I love it.”