Terrell – Terrell, Texas feels like your typical town here in the Lone Star State. Its historic downtown is usually buzzing with business, but back in the early 1940’s, it was a plethora of planes buzzing the sky that created commotion. To learn more about why this area was so active with airplanes, we headed where else but the airport to visit the Number 1 British Flying Training School Museum. 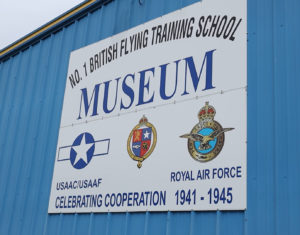 “I like history. I’m passionate because Terrell is my hometown and I didn’t learn about the school and the people here until I came after I retired… That it affected so many people that I knew,” said Rudy Bowling. Rudy is the executive director of the Number 1 British Flying Training School Museum, and he grew up in Terrell when this school played a vital role in World War II.
“This is a four year period that was very important to Texas, and the United States and Great Britain,” he explained.

This small airport was constructed back in 1941 to train British cadets how to fly. It was built before the United States involvement in the war through the Lend Lease Act, which allowed the US to supply military aid to foreign allies while remaining neutral in the conflict. More than 2,200 Royal Air Force pilots earned their wings here.“We were a microcosm of two cultures coming together. The young men that came from 3,000 miles away to a place that they thought still had Indians and Cowboys everywhere. They were a little disappointed when they got to Terrell,” said Rudy.

But the cadets where not disappointed by the Texas hospitality. “The locals took them under their wing. They knew they were far from home, so they tried to give them something to do on the weekends. They supported them. So, there’s a real connection between the culture of England and the culture of Terrell, Texas,” he explained. 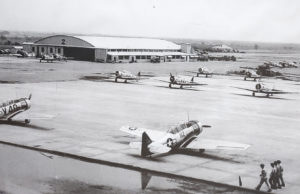 “Everybody we know, our grandparents were involved, they were helping train British soldiers go and fight,” said local, Kaitly Bray. “They were thousands of miles away from home and the people of this town opened their homes and their hearts and treated them like their own children,” added another local, Beverly Mardis. “To Terrell, it means quite a bit,” said Army veteran, Carl Nelsson.
“We brought them into our homes. We shared holidays with them, we taught them to fly and to defend their homeland. And they needed that ally and we were there for it,” said Kaitly.
“I’m so proud of the hospitality that this town showed during that time,” Beverly expressed.

Cadets trained in PT-17s and the AT-6, which is a plane appropriately named the Texan. For six months, they were taught by civilian instructors. Some of the cadets that came through here included men such as Robert Hardy, who would later become an actor in movies like Harry Potter, Thomas Round who would end up being a opera star and even a few Americans trained here like Lieutenant Richard Hill who had the unique distinction of earning two sets of wings. “I want to show you this very unique situation here. This is a uniform coat from an American cadet here at the school. His regular Army Air Corps uniform. And if you’ll notice it has two sets of wings on it. The American set and the English. And the reason for that is that this school taught under the British Syllabus. And if he learned under the British Syllabus, they decided, the powers that be, that he could wear the British wings on his other pocket. And it was kind of a mark of honor for them to get to do that,” explained Rudy. 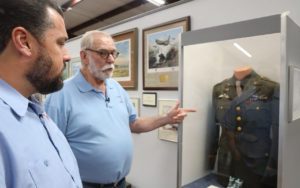 When you look at the faces that came here you realize how young these brave men were. “They were very young, they were very young,” confirmed Carl. “I look at the faces of the kids, literally kids that were here. All of those cadets that were here and they’re my grandchildren’s age… My heart just clutches every time I think about my kids going off to do the things that these men did,” said Beverly.

When these pilots flew down interstate 20, they had to put themselves in another place in order to get an idea of what it would be like flying over Europe. The school made a map that would represent that distances between cities in the old world with towns here in Texas and close by. “This is a representation of a training map that they used here at the school, during the war. And on it, Terrell represents London…Terrell to Berlin, which is very close to Pine Bluff, Arkansas. And that gives people, especially visitors, an opportunity to make it relative… [From Dover to Dunkirk] 15 miles…Very, very close,” said Rudy. “And you’ll notice that England fits nicely within the state of Texas with a little overlap into Oklahoma [and that is starting in between Waco and Dallas].” 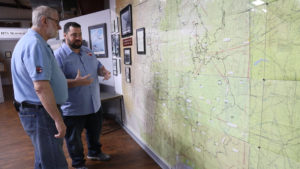 Getting such a detailed look at this little-known story of World War II is an inspiring tale of true courage. Many of the men who went on to fight in the war, sacrificed their lives to preserve their way of life and it all started right here in the Lone Star State.

“My respect for them knows no bounds,” said Beverly. “It’s not just a story about England and Texas, or England and America, and it’s a story about people,” Rudy explained. “They were being devastated in a faraway land, we made them feel at home. We made them comfortable. We brought them into our homes and celebrated holidays with them. And then we trained them to do their best to fight the war. We were their allies,” said Kaitly. “They felt empowered to go fight the war because they felt they had been trained well while they were here in Terrell, Texas,” confirmed Rudy. “It’s another level of pride in who we are as Texans to know that we participated in this,” added Beverly. “Thank you, for what they did,” concluded Carl.