South Padre Island – When you find yourself in the tropical setting of South Padre, you have to find something with the same feel when it comes to food. All you have to do is step into the dojo of Jerry Leal, a native of the Valley, creator of Pineapple Ninjaz, who has a reputation for enthusiasm. “We call it creative. It’s crazy on that side of the bridge, but it’s creativity on this side,” said Jerry. 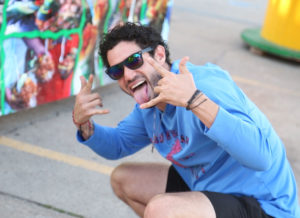 While trying to pick his brain about pineapples, the plethora of people on SPI that have a passion for this guy passed by in packs! I know we have a lot of fans down here, a lot of people honk and wave at us, but Jerry seems to be more popular. That’s because Jerry’s lust for life and belief in his brand is infectious! “Of course dog, I wouldn’t be this confident if it wasn’t,” he said. “He’s a good guy. He keeps us going,” said Angela Ramirez, an employee at Pineapple Ninjaz. 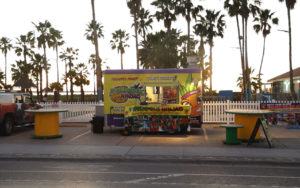 Now this colorful character has a few products with pizazz. First off is a piña colada that doesn’t pack any punch. “This is awesome, man. I’m going to have to come back for more,” said customer, Johnny Garcia.  “That is the Piña Colada… It’s pineapple with coconut juice, ice, we blend it to make a smoothie. Pour it back inside the pineapple mug, and then we add fresh cut pineapple on top with your option of Tajin Chamoy.…Welcome to South Padre Island,” said Jerry. “Very refreshing beverage, you’ll really like it,” affirmed customer, Richard Gomez.  “Woo-hoo! Aloha, South Padre Island,” added customer, Edna Garcia. “It’s all natural, so it’s nothing that you have to really worry about making you feel uncomfortable… You’re going to feel delighted, and you’re going to keep going with your day here at South Padre… it’s going to give you a fresh burst of energy to keep exploring island life. That’s what we want you to do,” explained Jerry. 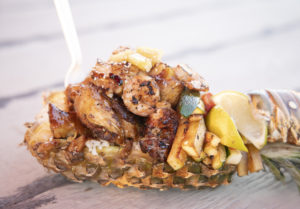 As for their food, it’s gets heads turning too. Angela Ramirez put together these pineapples covered with all sorts of stuff. “So what we love is seeing their faces as soon as we hand them the bowl, they’re like, ‘Oh my God, what is that?’” said Angela. “That one [the Big Baller Bowl] is going to come with Cajun seasoned jasmine white rice, grilled zucchini fries, lobster, chicken, and shrimp… This is all going to be in a half of a pineapple,” she said. The smell of lobster and shrimp cooking with drizzled pineapple juice is carried by the ocean breeze and it really does put you in the perfect place. Once everything is ready, it’s rammed into the pineapple and topped with a tail. “We put the tail in the back end as a garnish. So it’s probably one of the most popping things on Facebook aside from Justin Bieber, so it’s pretty photogenic,” joked Jerry. 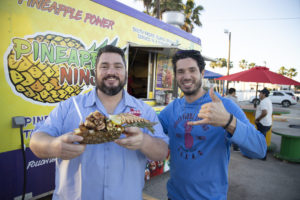 The combination of flavors along with a few sips from a piña colada make the long drive to South Padre so worth it. It’s so savory right off the top, followed by a bit of that Cajun kick, that ties it all together nicely. “Bring an excitement to eating on the island,” said Jerry. South Texas, you are so unique. “This is like being on the big island of Hawaii. But I’m here on South Padre Island, no place like home,” said Johnny. Even the zucchini’s good. “The food is delicious,” agreed Edna. If you’re looking for big flavor, and you want to be a baller, Pineapple Ninjaz on South Padre Island is worth a stop on The Texas Bucket List.

“I think this business has amplified the joy. I mean I’ve been blessed to walk a rocky road, but always gather knowledge through everything that I’ve been through, and reapply it. I’ve had the opportunity to see another day and just keep trying to do something better. And with this it just gave me the opportunity to kind of show out every single day,” expressed Jerry. “This is something that he conceptualized and has built on his own. And my hat’s off to him for that,” said Richard.  “It’s number one on my list, it’s refreshing, it’s sweet, and it’s tropical, and the place to be in South Padre Island,” concluded Edna. “Continue to try exploring flavor. That’s all we can ask for, and visit South Padre Island,” said Jerry.