Waco – A few blocks from the sought-after silos in Waco, sits a southern eatery with all kinds of home cooked goodness. Marcia Neal is the creator, owner and the person who has a very particular nickname.  “It’s Sascee’s [Sassy’s]… It’s just spelled different. My mom nicknamed me that when I was a few hours old…I thought it was going to go away after I got to be a teenager, but it didn’t. So, everybody still calls me that… it just kind of stuck,” said Marcia. 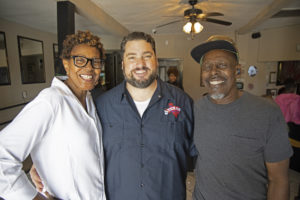 Sascee used to work a regular 8 to 5 as an events coordinator with Texas State Technical College, but when she started to bring home cooked meal to share with some of the students at school, she realized she had a talent. “Instead of getting pizza all the time, they want home cooked meal. ‘Can you cook something? Can you cook spaghetti? Can you cook?’ Next thing I know, I was cooking regularly, and they acted like it was so good. Like, ‘Oh my God, who cooked this? So they kept making a big deal out of it,’” she explained. That inspired Marcia to start a little catering business on the side. “I went from catering once every six months, to once a month, to every weekend. They started saying, ‘Can you do my lunch on Wednesday?’ I was like, ‘I got a job,’” she said.

Marcia decided to take the plunge. She went back to school to get a business management degree and with the help of her husband, John, the couple found the strength to start Sascee’s Southern Eatery. “It’s just phenomenal to see anybody grow like that in your own city and your home grown…It’s wonderful,” said Kimberly Thomas, a regular at Sascee’s. “I think it means everything. It’s just good. It’s just good to have the food,” agreed customer, Winston Rainey. “People kept coaching me and encouraging me. I found this little spot and when I first looked at it I was like, ‘Ah.’ Then he’s like, ‘Well you’re still kind of close to Magnolia and look, they’re building up a couple of hotels down the street. I think it’s going pan out for you.’ And I was like, ‘Oh, let’s try it,’’ said Marcia. 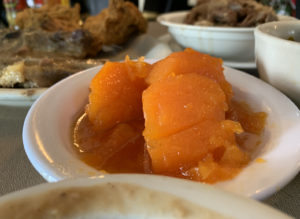 Together they have created an incredible place for southern food. It truly takes a team to create the amazing flavors, you’ll find here. “People from the South can come in here and get some butter beans and cornbread and be cool. Like, ‘I’m from Hubbard. Black-eyed peas and oka, what?’” said Marcia. “I be trying to come up every day if I could,” confessed Kimberly. “It’s just good food,” added Winston. “I come here any day and have a good time,” confirmed another customer, Anquanae McCullen. “They tell me when they come in… ‘I ain’t had this kind of food for a long time. It sure feels good,’” said Marcia. 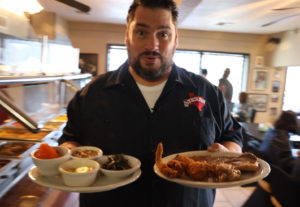 Before we binged at the buffet, we headed to the back to meet the colossal cook nicknamed Popo to see what goes into this sort of sizzling, steaming, and frying.
Popo has a pedigree with come to this particular kind of cooking. “You’re raised like this. A few pointers from my mom. I’ve been to cook school, but then most of it is just from life experience…That’s what it’s all about,” he said.  I seems these recipes speak to Popo. “I chose comfort food because it’s more food of the soul, food of the spirit, so that’s why it’s always great,” he said. Collard greens, squash, and sweet potatoes are some of the staples here. “We try to have the same good stuff every day. That way we don’t have to worry about who walks in,” said Popo.

Sascee’s is also home to some legendary fried chicken. “We fry it up golden brown and we use that special seasoning that we mix, we sprinkle it on and they love it,” Popo explained.
His answer the secret to cooking up delicious soul food, like oxtail, is simple: “Knowing what you’re doing,” he said. The smell from the kitchen is enough to make anyone ready to run to the front of the line. 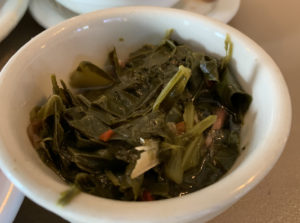 We picked out an assortment of incredible things to sample at Sascee’s, starting with the sensational amount of sides. The collard greens are the calling card of this place. They’re not bitter at all. The turkey broth blends perfectly and that creates some magic right there. “Melts in your mouth,” said Kimberly. Up next, a little squash sautéed with butter and onions, making it hard to beat. “It’s a must,” added Kimberly. Then there’s the sweet potatoes. They smell so amazing you feel like you should save them for dessert, but they are too delicious to wait for that. There were six meats offered, and we sampled three. Starting with the pork steak. It just pulls right apart. It’s tender, you don’t even need a knife, and that gravy that goes on top of it is the perfect combination.

Onto the famous fried chicken with that secret seasoning. It even smells like it’s got a little something extra there. It’s delicious. A nice little light layer of frying with just a subtle seasoning. “It’s like a different seasoning. I love their seasonings,” said Anquanae. Finally, an oxtail, which was a first on the show, proved to be full of amazing home-cooked flavor. “It’s just phenomenal. It’s phenomenal. It is great…I would tell anybody to come,” said Kimberly. Well if you ever need some Southern food that will fill your soul, Sascee’s Southern eatery is well worth the stop on The Texas Bucket List! “You won’t be disappointed,” said Winston. 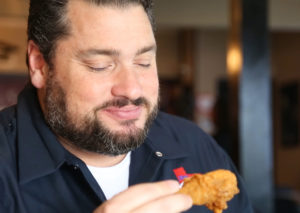 “We put a lot of work into it, a lot of love into it. So, that’s a good feeling if somebody else likes it besides me,” said Marcia.

“I feel like a lot of people see The [Texas] Bucket List, and we made it. So, thank God for that!” added Popo.

“You need to come in and try Sascee’s at your own risk. You’re going to always come back,” Kimberly concluded.