Houston—Every June an eclectic gang of curious people come together to celebrate their love of music. They come dressed to impressed because putting on a performance is what this collaboration of creative entertainers is all about. Just don’t expect to see any real instruments. Welcome to the U.S. Air Guitar Regional Championship! 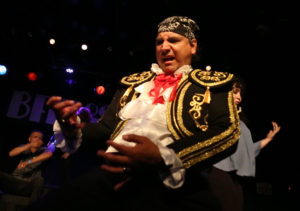 “Texas has some great air guitar players…We have it all,” said organizer Randy Garza. Randy is big fan of Rush and the man who rushes to put this peculiar competition together each year. He’s also known as El Airachi. His alter ego has made it all the way to the National Semifinals in Chicago, a riff away from the World Championship held in Finland every year.

“When I was little, I used to always emulate playing a guitar. My mother, God rest her soul, she used to always say, ‘Someday there will be something that will have air guitar and it will pay off. You will be the winner,’” Randy recalled. The competition at the US Air Guitar is stiffer than the brisk winds coming off the gulf with great competitors like Stonehenge, Wild Child Roshi, Uncle Hot Dog, and even Xena. “I don’t know how to play the guitar,” Xena confessed.

Good news is, she doesn’t have to. These masterful melody imitators take this face off very seriously, even without instruments. “This is something that I love, and something I love to perform, and a friend of mine a few weeks ago said ‘Randy, some people get it, some people don’t. But guess what, a lot of people get it,’” said Randy.

The judges are serious too. Grading presentation, strumming, plucking, picking and playing of an abstract guitar. “I think one of the main things that a lot of our judges really look for is what’s called airness. That is your little unique qualities that no one else is possessing. That evening, or ever,” Randy explained. “The judges will see it and they’ll pick up on it.”
I guess we’ll go ahead and rock on. 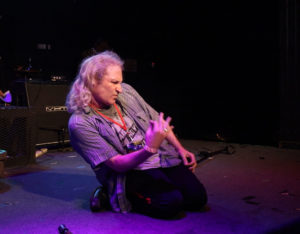 “You’ll see people do it, and you’re like, ‘oh, okay.’” Said Patrick Friend. Patrick placed fifth his first time out. “I know some people, I see them try to play air guitar and I’m going ‘Wow, you’ve never even seen a guitar played, have you?’” he laughed. Patrick loves the competition because it lets him let loose and literary throw away the crutches to perform.
“I go by GimpDaddy in the air competition, primarily because I was born with spina bifida,” he explained. “I don’t like to use my handicap to an advantage, but I do understand that it does bring out a certain element that a lot of people aren’t expecting, and they’re like ‘Wow, someone like that did that.’” An extremely tough competitor, Patrick feels the music rush through him and for a few seconds he’s a rock god. “For those of us who didn’t have talent, but still have that appreciation, this is a way for us to perform…It sounds silly, but it’s a thing, and it’s enjoyable,” he said. “You’re like a rock star for just a few moments, you know? If you’ve never been a rock star, if you’ve never been on stage like that, it’s the best feeling,” confirmed Randy.

In the end, it’s a competition and only one can move on to the US Air Guitar National Championship. For a few hours it’s also just a chance for people with regular day jobs to pull a Page, keep up with Clapton, sling some Stevie or act like Angus. They come together for their love of music and leave us all with a feeling like we’re floating on air, making it well worth a stop on The Texas Bucket List. “Music has been a huge part of my life, I’m always listening to music, always rocking, and this is just a huge extension of it,” said Randy. “I just have fun, you know? I suck at being a shut-in, and so I get to come out, I get to enjoy music, hang out with people who are just… really good folks, and it’s just fun,” concluded Patrick.