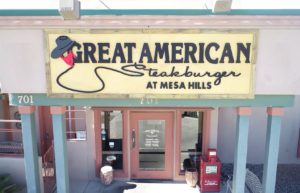 El Paso— During our trips to the western most city in the state, we’ve tried some of the most amazing Mexican influenced food in the state, but this time we felt like something different, because nothing screams El Paso like a steak sandwich.

“The ribeye is the most popular steak and so we said, well, let’s make a sandwich out of it,” said owner Cris Green. Cris isn’t green when it comes to working in the restaurant industry. He has been working for The Great American Steakhouse since he was young man. “I was 16 years old and needed a job and there was a restaurant that was a couple of blocks away from home. So I went and applied, my best friend worked there and so he got me a job there and I’ve just never left,” he explained. “They opened in ’77 and I joined them in ’78…So been in for 40 years.”

All those years later, he’s now the owner and along with his wife, Theresa, they keep up this El Paso tradition of terrific steaks and burgers. “They know how to cook a steak,” said customer, Brookes Coleman. “They’re very flavorful and they’re juicy,” added another customer, Jerry Odom. ”That unique West Texas flavor, West Texas experience,” claimed customer, Gilbert Koppman.
“When we serve a steak, it’s going to be the best that it can be,” confirmed Cris. 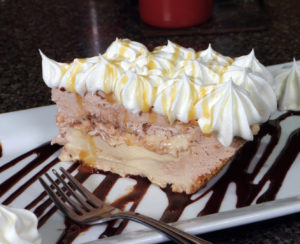 Now serving steaks isn’t their only mission in life, they also happen to be on more spiritual mission.  “Our faith is the core of who we are in the restaurant here,” Cris explained.  And it all starts with desert. “It got dubbed the Mission Pie,” he said. Theresa is known for her terrific pies, but the couple’s faith pointed them in another direction when it came to pastries. “She said, ‘If I’m going to come in here and make this all the time, then we’re going to do something with it,’” he explained. So the proceeds from their pie sales go to charity each and every month.
“My wife and I just have a strong faith in God and so we want to include Him in what we’re doing. We…really feel like this is His restaurant, not ours. We’re kind of stewards of it. He wants us to take care of the people that we have. This is family and you’ve got to take care of them,” said Cris. One of the members of the family is Alfonso Sierra and he too started in this industry early. “[Worked here] 12 years already… [Started at] 17,” said Alfonso. 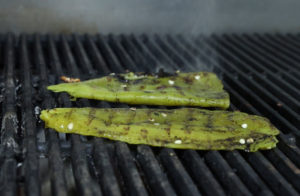 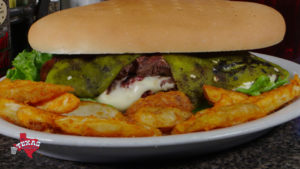 The bun is freshly baked, soft and beautiful. That rib eye steak just sitting in there, perfect medium with those Hatch peppers, just layer after layer of fun. With each bite, you can taste the unique flavors of this part of the state. Holy Hatch!

“Big fan of long green chilies, big, big fan,” confessed Gilbert.  The steak sandwich is definitely a food explosion that hatches in your mouth. “Very unique,” added Jerry.  As you go down the line of the sandwich is the steak gets a little thinner at the end and those Hatch peppers get thicker, then you really get into that Hatch flavor, which is just so unique and an amazing flavor, you can find year-round here in El Paso. “They’re generally not hot, excessively hot, but they add just the right amount of flavor,” said Gilbert. “You know when you come and you want to order something that you love, you want to make sure it’s going to taste the same way it did the last time you were there,” explained Brookes.

Well, you may have to go all the way out to the West Texas Town of El Paso to get a ribeye steak sandwich topped with Hatch chili peppers, but if you’re willing to make the drive or the short flight, it’s well worth the stop on the Texas Bucket List. “Before you go, you need to come and experience this,” concluded Gilbert.