Brownsville – When talking about flavors of South Texas, the BBQ you’ll find at Vera’s Backyard Bar-B-Que tops the list.  People drive from near and far just to get a taste. “I drive 50 miles just to come to this restaurant,” admitted Isidoro Galindo, who frequents Vera’s about once a month. “It’s really good, I like it,” affirmed Rachelle Galindo. “Super good,” agreed Jeremiah Galindo.  This isn’t brisket or turkey, it’s a much more cultural type of cuisine that really puts the head into it. “He’s smiling for the camera. Look at him, he’s got more teeth than me, eh?” said owner, Armando Vera, as he brandished a large cow head. 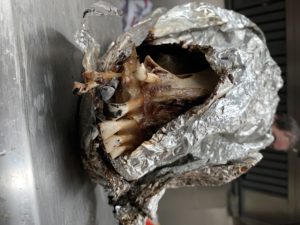 At Vera’s, barbacoa is the only dish they dish out and it is legendary. “Not anywhere, you can find this type of cooking,” said Isidoro. “It’s something good to try here in South Texas. It’s one of our top dishes out here,” added Rachelle. “My dad said, barbacoa is like marijuana. Once you smoke it, you get hooked to it,” said Armando. 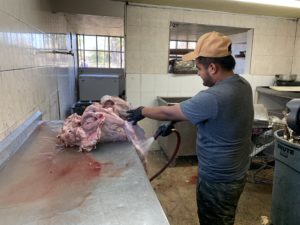 Armando Vera doesn’t smoke anything but massive cow heads, but he is the kingpin. That’s because Vera’s is the only place in Texas, and most likely the country, that you can get barbacoa cooked the old-fashioned way—in the ground. “Well, I’m willing to taste anything,” said Rachelle. “The late ’70s, early ’80s, that’s when it became outlawed… We were grandfathered [in]. We still have to meet the health regulations,” explained Armando. You may be wondering, is it safe? “We’ve never had anybody get sick, let me tell you that,” Armando assured. Good enough for us! 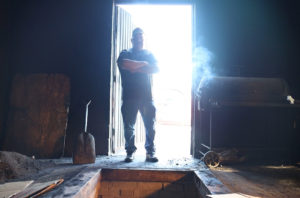 “It’s nothing to be queasy or be intimidated to try. It’s super good, tastes like brisket,” claimed Jeremiah.  Vera’s was started by Armando’s father, Alberto, in 1955. Armando took over in 1972, at the age of 12, when his parents separated.  “If it hadn’t been for him, the business wouldn’t have been here. Of course, God also. I always thank God. I’m very blessed. Without him, nothing is possible,” he said.

Cooking cow heads all starts with a massive fire full of mesquite. After cleaning the cow heads, they’re wrapped in foil, dropped in, and left to cook overnight. “We don’t add any spices, we don’t add any salt, we don’t add any condiments. We’d don’t add anything to it. It’s just barbacoa. It’s just the pit, the mesquite,” he explained. When the heads head to the kitchen, that’s when the real fun begins. With his years of experience, Armando separates the meat of the head into some specific parts. 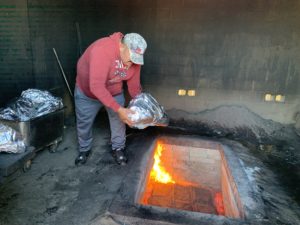 “[Cacheta or cheek] That’s the majority [of the meat]. That’s normally what you’d get anywhere you go when you ask for barbacoa, that’s what you get… Mixta, it’s what’s leftover of the beef head, once you take out the tongue, the cheek, the eyes, [and] the palate. It’s the other meats in the head … Mexican caviar. Those ones [the eyes, or ojos] are sold out by eight o’clock in the morning maybe, sometimes 6:30 in the morning… Paladar is palate… That’s one of the things that sells first, also,” he explained. “I don’t think I’m going to try that one. Something about eyes, I can’t,” said Rachelle.  Considering we have nothing to prove, we’ll pass on the peepers. 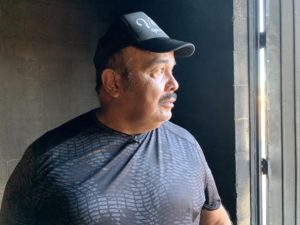 “People buy different things, so you’ve got to separate everything,” said Armando.  We decided to go with the more common cut of meat, the cachete, and what the heck, throw in a little lingua!
We finally made it to the Shangri La of barbacoa barbecue, right here in Texas.  We’ll go down the easy road first with a little of the cachete, which is cheek meat. We just saw it come off the head, but as soon as you put it on a taco, your perspective changes. Steaming hot, fresh out of the ground, and feels like the most tender pot roast you’ve ever had.  “As soon as I take that bite, it takes me back to when I was a kid,” said Isidoro.  “It just tastes differently when it’s prepared correctly,” agreed Jeremiah. 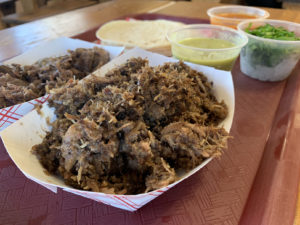 Now you’ve got to remember when you’re eating this meat that the flavor isn’t provided by spices, salt, pepper, none of that. It’s the bone from the cow head that makes this taste as delicious as it is.  “You can’t replace the hands on, the old school, the aroma of the mesquite going inside the meat,” claimed Isidoro.  Now, it comes time to taste the tongue by putting it on the tongue. It’s not overpowering. It’s a really smooth, subtle, lean beef flavor.  “Barbacoa here is really good and you won’t regret it,” affirmed Rachelle. 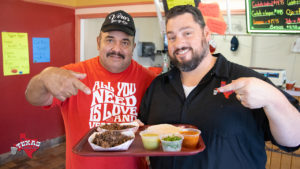 If you’re looking for some old school flavor along with an old world tradition, coming down to Brownsville and trying the barbacoa at Vera’s Backyard Bar-B-Que is well worth a stop on the Texas Bucket List.  “It’s something that every Texan should come and give it a try,” said Isidoro.  “It’s an honor, a privilege, and like I said, it’s in the blood. I love it,” said Armando.  “You get the barbacoa, you get the friendly people here at Vera’s, and it’s just overall a great place to visit and experience South Texas, the way our culture is,” concluded Jeremiah.