The Texas Bucket List – Monsters on Main in Denison

Denison, TX — It’s time to visit a few little monsters in the Lone Star State, but don’t worry, the little fellas are harmless. They come from the mind of an upholster north of Dallas in Denison and these darling dolls don’t dare scare, but you might find one deep in your couch. 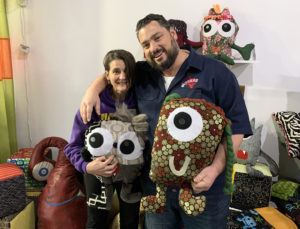 During a rainy winter morning, downtown Denison doesn’t really bustle like usual, but over at Rugs and Stuff, Nitia Musico is busy creating her craft. “I couldn’t go do a proper job. This isn’t a proper job. This is fun,” said Nitia. Nitia is a native Texan, thanks to her Mom’s side of the family.  “I was [born in Beaumont]. My parents were in Nigeria, didn’t trust the hospitals and went back. My mother went back to her parents and I left when I was weeks old…I was there until I was 14, but we were shipped off to boarding school in England at the age of eight,” she said. After college, Nitia moved back to Texas. “Had enough. Came over without a job… I’m a Texan, I’m going to live in Texas,” she said.

She took a job as a nanny in Dallas, but then life tried to pull the rug out from under her feet. “Got cancer… Hodgkin’s Lymphoma… It was a little scary, being over here by myself. Better treatment here than had I gone back to England,” she said. Nitia thread the needle to defeat cancer and that sowed the seeds for her to start her business. “So that’s when I quit… and decided I didn’t go to college to be a nanny. I went to college to do furniture and textiles. So, I started my own company,” she said.

For over 30 years, rugs and reupholstery has been the reason she’s had success. “I like to do the work myself. I mean if I’m not actually touching fabric or doing something, I just feel like I haven’t achieved anything,” Nitia explained. One day, she created something out of scratch thanks to an overabundance of extra materiel she had in her shop. “I can’t throw my remnants away from the scraps of fabric from leftover upholstery jobs. I just have shelves full of fabrics and I just wanted to do something with them,” said Nitia. That’s when the monsters showed up. 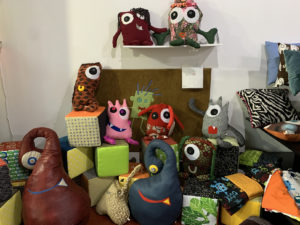 “They are remnants… this one, leftover from an upholstery job, some chairs I did,” she said as she showed off her collection of stuffed monsters made from fabric scraps. “I think that’s some pillows. And that is a cushion I did from an apartment complex… Got a little flappy tongue.” Nitia started making her colorful characters to draw in customers but they’ve become so much more than that. “It’s worked. I can’t keep them on the shelves. I’ve got a lot of work to do,” she said.

People love Nitia’s quirky creations. “They’re just strange because despite my years at art college, I can’t draw,” she admitted.  Nitia doesn’t have a strict process when it come to the creation of her little monsters. “It just comes, it really does or I’ll just draw a shape and then I think, okay, this guy doesn’t need arms, yeah, he doesn’t need arms. And then I’ll think it’s going to have two eyes and then I’ll put one eye on it. And a lot of them have one eye, just because I’m blind in one eye, so I have a tendency just to make them all one eyed,” she explained. Not only do these handmade monsters bring joy to customers, but also to their creator. “It’s just fun and I’m just so happy everyone’s so enthusiastic about them. I love it… We all need some little critter to cuddle,” said Nitia.

While creating unique rugs and custom pillows is pleasing to particular customers, the monsters on main do much more than that for Nitia. They bring joy, laughter, and love to people cut from all sorts of different clothes. “Just to look at and make you smile. And not all scary things are hiding under the bed. There’s happy little monsters out there too,” she said.