AUSTIN – There’s a sign in Austin that you’ve probably seen a time or two on social media. You may have even caught yourself laughing at the little quotes its displayed over the years. We’re talking about the sign at El Arroyo, and we had to get the real story behind the restaurant’s greatness. 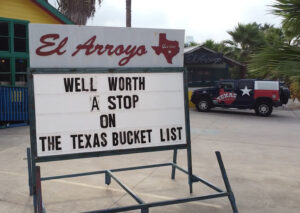 El Arroyo sits at the corner of Campbell and West 5th Streets and it has been dishing out tacos in Texas since 1975.

Winstanley has seen Austin grow around his well-known Tex-Mex joint. He’s been able to survive and thrive through the changing of times thanks in part to a sign that brings in customers from all over the country.

“A lot of people put their arm around the sign, like it’s an old friend, and take a picture with it,” Winstanley said. “It’s just kind of cool.”

If you’ve never seen this sign, chances are you are not on social media.  But, if you have ever browsed Facebook or the interesting images on Instagram, you probably have gotten a good laugh from the sign at El Arroyo.

“For the most part we’ve been able to stay in the pocket of just like, “Hey, look, this is about making people smile and have fun,” “ Winstanley said.

The funny sayings got started in 1987, when the previous owners Clay McPhail and Doug English dug out a sign and started putting witty, whimsical, wacky sayings on it to attract eyes to their eatery. 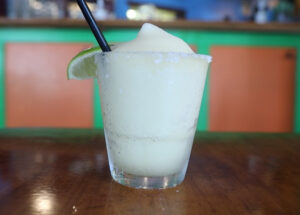 “So my personal favorite is, “Last queso stop before a bunch of yoga studios,” Winstanley joked. “I just think it’s hilarious.”

Winstanley took it to the next level by exploding the placard’s popularity on the internet.

“I don’t think we imagined it like this,” Winstanley said. “We knew people connected with it. We knew we could kind of grow the presence of it, but we didn’t think it would take off and just continue.”

Having some magnificent margaritas does not hurt, and you might just be able to thank the El Arroyo sign for starting a motion during the summer of COVID that now allows you take these tasty beverages to go!

“We put up a funny sign (that read) “Now would be a good time to legalize margarita delivery,” and we got all these comments about it,” Winstanley said. “Then it just kind of took hold from there. I didn’t change the law in Texas, but it definitely helped us get focused on the conversation. When he (Texas Governor Greg Abbott) made that legal it was a game changer for Texas restaurants, particularly Mexican restaurants.”

While the sign may have helped with recent legislation, its true nature is to give people a good laugh. Winstanley’s wife, Paige, had an idea to further its reach.

“We always wanted to do like a coffee table book with the signs because the sign has meant a lot to Austin,” Paige Winstanley said.

However, originally book companies only read the book by its cover.

“Nobody would publish it,” Ellis Winstanley said. “Everybody just said that it wasn’t going to work. So, we ended up having to do all the work to set up a publishing company to do it and then got a printer to do it. So, then my wife (Paige) put them in the trunk of her car and drove around to Houston, Dallas and San Antonio. She said, “Listen. Just keep them. Sell them. If you sell them, pay me. If not, I 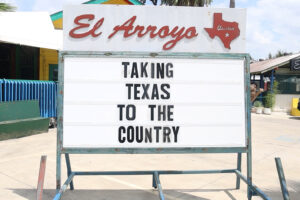 ’ll come back and get them.”

The humor was eventually a hit and now you can find El Arroyo books in stores in just about every single state in the country, including The Texas Bucket List Store and Studio in College Station, Texas.

El Arroyo has a whole team of folks who constantly come up with the clever sayings.

“Sometimes it’s 10:30 at night and we’re just working together, and we come up with some fun stuff,” Paige said.

There are now post cards, signs for various occasions, greeting cards and even Christmas ornaments.

“The priority is to make people smile,” Ellis Winstanley said. “To kind of connect with people in a real way and to focus on current events.”

So, if you looking for the sign that takes Texas to the country with a little laugh from the Lone Star State, heading to El Arroyo for an ice cold margarita and the perfect picture for your Instagram is well worth a stop on the Texas Bucket List.

“Seeing it in person is just so much different from seeing it on our social feed, “Paige said. “It’s just nice to see the letters.”

“It’s an experience a lot of people have already connected with, and they want to put the food and the drink with the experience they’ve seen online,” Ellis Winstanley said.