The Texas Bucket List – Mill-King Dairy and Creamery in McGregor

McGregor- McLennan County may include the metroplex of Waco, but down in McGregor you’ll find some magnificent fields full of cattle with plenty of room to move. “We have about 50 cows and we have about 700 acres,” said Craig Miller, owner and operator of the Mill-King Market and Creamery. 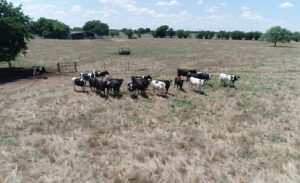 The Mill-King Market and Creamery is a business that has been in Miller’s family long before the cows came home. It all started with his grandfather, Arnold Miller, in 1941 and his father Billy kept the family farm alive until Craig was ready to dive into dairy.

“Me and my brother swore that we would never come back to this, he stuck to his guns, I caved and came back,” joked Craig. 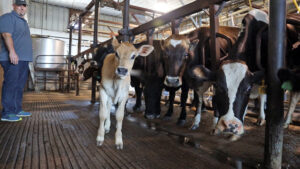 Despite the longevity of their family farm, the way the Miller’s do business drastically changed in 2009 when the milk market spilled over and they didn’t have time to cry about it. “The price was bad enough where we couldn’t sustain the losses that were coming our way,” explained Craig.

The Miller’s stopped selling to processors and started selling directly to the consumers. “We literally started selling one bottle of milk at a time, filling it with the valve, and selling it at the farmers market here in Waco, then the farmer’s market in Austin where we made contacts and it grew from there,” said Craig. 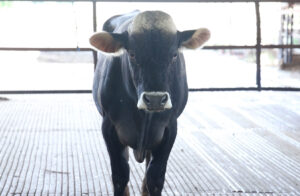 While their milk is available across the state, you’d be surprised how utterly popular their little store is. There’s no doubt that customers are excited about getting their fresh cup of milk.  “Yeah, it’s been a good ride,” said Craig. 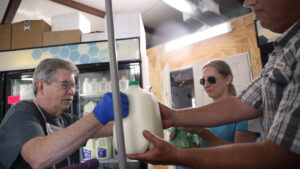 “Our milk is low temp pasteurized, non-homogenized,” said Craig. Now if you’re not familiar with homogenization, don’t feel like you’re a laughing stock.

“Homogenization means to mix up and what they’re doing is they’re taking the cream, the cream is actually little balloons which are the fat globules to keep that from floating to the top you need to pop that little bubble. Well to do that they literally pump it into a stainless steel plate so fast it shatters the fat globules. When we do that we take protein chains we’ve evolved to recognize and we turn them into things our bodies have never seen before… We want to take what mother nature made, and not mess it up,” explains Craig. 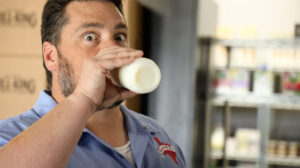 The great Andy Rooney once said, “Milk without fat is like non-alcoholic scotch.” Well this would be a drink Andy could raise his glass to. Since the milk at Mill-King is minimally messed with, Craig started me off with the 1% milk. Craig explains that their 1% milk at Mill-King is similar to the whole milk we find at the grocery store. The 1% milk I tried definitely lived up to that reputation and tasted fresh and delicious. Now the whole milk takes things to a whole other level.

“Our milk is bouncing around 4% butter fat which conventional whole milk is 3, 3 ½%. It is very rich, it’s very smooth,” said Craig.   After taking a sip, the whole milk was very creamy and definitely what you would want after eating something spicy.

And chocolate milk? Don’t worry, they have that too. “It’s what we call cacao mill. It’s our one percent milk with agave nectar and cacao paste,” said Craig. The chocolate milk smelled like a candy bar and did not disappoint.

Craig’s favorite part about being a dairyman is that he has freedom. “ I get to do what I want when I want, I get to set my own schedule and as long as everything gets done, no one’s upset,” expresses Craig.

It seems as long as there is milk on the table in the morning, everybody is happy.