Goliad – Goliad is known for great history, from Presidio La Bahia to Mission Espiritu Santo, the story of this town goes back to 1749, but you can get hungry exploring all that history and you’re in luck!  We’ve got some delicious soup for you. 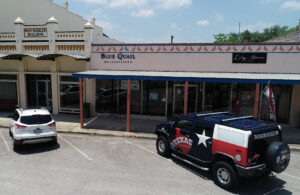 “Soup? Really? Why would you go somewhere for soup?” joked customer Zoe Davis.

And that’s exactly what we thought but then we stepped into the Blue Quail Deli and met Patti McCraney, Chief Bottle Washer and Master of None, according to Patti.  Patti is the General Manager and originally from a faraway land called Ohio, but she got to Goliad as quickly as she could and it wasn’t even for the wildly popular Cream of Jalapeño soup!

“People come from all over and they come here for the soup,” said customer Diana Harrington. 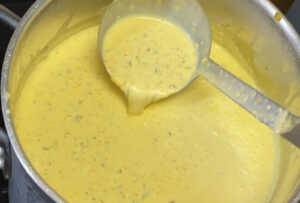 “There’s people that don’t like it or say ‘oh that’s too spicy for me’, but I like it,” explained Patti.

The recipe hails from one of the owners of the Blue Quail who happens to be a lawyer. That means this heavenly jalapeño soup is extremely guarded. Very hush hush!

“When we hire people, we have them sign a disclosure. You’re not allowed to give out the information on what’s going in it and what’s what,” Patti explained.

Well we’re not going get an inside look at how this hodgepodge is held together but we did get a workout while getting our soup and sandwich on. Patty took me back to the kitchen where the famous soup and sandwiches are prepared. We took a walk down a long hallway that led us to the refrigerator where the glorious soup was and put it on the stove.  While the soup simmered, we got to work on a sandwich while the phone rang off the hook! For the sandwich, Patty started off toasting the bread that’s baked in house, then prepares the ham and turkey. The toast is topped with mayo, and layered with lettuce, cheddar, swiss, tomatoes, and bacon. 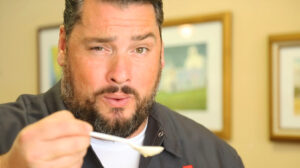 The first taste of the soup is buttery, delicious, creamy, and everything you’d expect from a cream soup. Once you start kicking the soup around in your mouth a bit, the spice sure does kick you in the tongue.

“Even on a hot day like today, when it’s 105 degrees, you still want the soup,” joked customer Sharon Swize.

It got a little crazy with the club sandwich and found out that dipping it into the cream of jalapeño soup was an explosion for the taste buds. 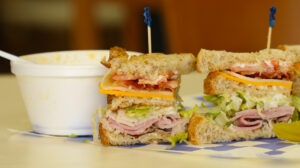 Well if you are ever looking for a go-to soup in Goliad, the folks at the Blue Quail Deli have got you covered with the incredible Cream of Jalapeño soup. We asked Patty why every Texan needs to come and experience this amazing place. “Well to meet me for one, and to try our cream of jalapeño soup… And enjoy Goliad, it’s a neat place it really is,” said Patti.

The Blue Quail Deli has a soup that Texans are sure to love, which is why it was well worth a stop on The Texas Bucket List.