Nocona – Nacona, Texas used a be the hotspot for cowboys on horses heading down the Chisholm Trail, but today, you will find a lot more horsepower in the middle of town.

“This is the car capital of Texas so we kind of took the ball and ran with it, we like that,” said Billy Dean Dobbs, the car caretaker of the Horton Classic Car Museum. 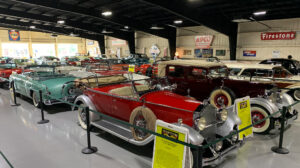 The Horton Classic Car Museum is an incredible compilation of cars, some of which are the most sought out antique automobiles in the world. “There are so many stories on each individual car it’s unbelievable,” said Dobbs.

Billy Dean used to work in the oil fields, but when the museum opened in 2013, he floored it on over to the fine collection to help care for the classics. “It’s been a dream job for me, I’ll tell you the very first time I came in here and saw this I was just blown away and I fell in love with it,” said Billy Dean.

Within the car museum, there are some immaculate cars that well preserved given their rareness that bares the question, why in the small town of Nocona? “The reason why this is here is this is Mr. and Mrs. Horton hometown, so why not put it in the little town of Nocona, Texas,” Billy explains.

Pete and Barbara Horton still call Nocona home and during a very successful career in the oil business, Pete wandered into a car auction one day and was hooked. With just dipping his toes into car collecting, Pete came out of his first car auction with 16 Corvettes. Today, the collection has grown into 150 cars with a total value a hidden secret. 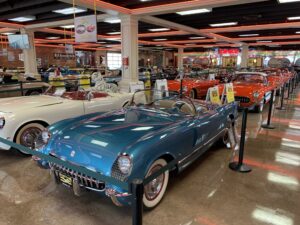 With three massive buildings to explore, you’ll find fine automobiles with far out stories. First and foremost, the collection of Corvettes was surely worth talking about. You’ll find every model from 1953 to 1973 in just one room.  Among them is a 1953 Corvette, one of only 300 remaining in the world.  But there is so much more to each one of these very rare Corvettes, some even previously owned by celebrities!

The 1954 rare Pennant blue Corvette owned by Roy Clark. “I kind of like to get in it and sit in it every now and then and act like I’m picking it and grinning it like Roy,” joked Billy. 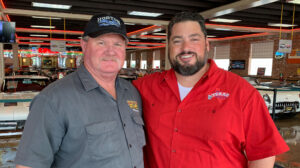 The collection also includes a 1963 Stingray Split window corvette that once belonged to Sandra Bullock , a green 1967 GT500 owned by Caroll Shelby that even has his signature on the dashboard! “It’s a bad hombre,” joked Billy. In other rooms, there are more jaw-dropping classic cars from a 1931 Packard to a Ford GT 350 owned by Bob Seger. 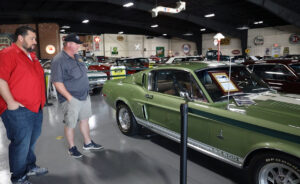 With all of the classic cars in the museum it was just too hard to choose one to deem a favorite. For Billy Dean, he knew which cars were his favorite. “I think I’d have to go with the ole’ Packards, they’re just all hand built and they didnt have all that technogoloy that we do today, and to see it all built and well-made like that is unbelievable,” said Billy.

Being able to see these classic cars in immaculate condition with colors that can canvas the color chart is well worth the cost of a tank of gas to get here. “If you are a car classic enthusiast then this is the place you’ll need to come, it’s quite an honor just to be able to come in, and walk through here and see cars that you don’t see anymore,” expressed Billy.