Bryan – On the bustling border of Bryan and College Station, you’ll find Truman Chocolates.  A unique stop for colorful chocolates from a local chocolatier.  “I figured I could sell enough chocolates to pay rent and that’s what I’ve been doing, paying rent and learning one mistake at a time for 14 years,” said owner Mitch Seigert. 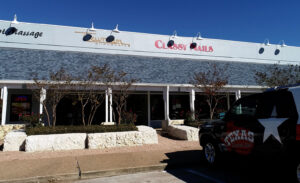 Paying the rent hasn’t been too much of a problem for Mitch Truman Seigert thanks to his chocolates that look like a piece of art.  Mitch is a hometown kid who went off the Culinary Institute of America in New York.  “I wanted to do breads and desserts because I wanted to open up a restaurant,” stated Mitch.

During his time there, he was able to work on the Food Network and help create dishes for all the big time celebrity chefs, and we had to get all of the details. “Yeah. Emeril is just like… He’s just easy going, he’s personable. Bobby Flay is exactly like what you would think his personality would be. Rachel Ray’s funny. She was funny,” explained Mitch.

But the lifestyle of the rich and famous wasn’t for him, so he moved back home to Bryan to become the Willy Wonka of Aggieland.  “I never ever set out wanting to do chocolate or anything like this, but it was something that I could do in my hometown and I wanted to come back to Texas,” said Mitch. His savory sweets became a sweet success. 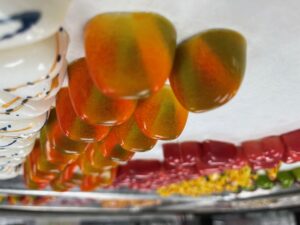 But the pandemic put a bit of sour note to the sweetness of that success and as the hot time known as the holiday season started to kick in, Mitch’s wife Jenny jumped on the idea of creating a few of the hottest trends in Christmas confectionery, hot cocoa bombs.  “I never wanted to do the cocoa bombs because it was always when we were crazy busy. So we started doing those and I just always figured the juice wasn’t worth the squeeze. I’m not sleeping. I’m not going to add anything to it ever. I wouldn’t do a seasonal flavor in December ever because I didn’t couldn’t keep up. I didn’t care. But now, leave it to a pandemic to get you as far out of your comfort zone as you could possibly get. But it’s good,” explained Mitch.

Now if I was going to enjoy this explosion of festive flavor Mitch wasn’t going to gift it to me.  So I got to work like one of Santa’s elves. “Now get a little bit of color. Okay, now put some in the mold, can’t do it wrong. There you go. Do another one. Keep going. You got to do all six. See, I know you have an idea of what you want, that’s perfect,” Mitch directed as I made the hot cocoa bomb. 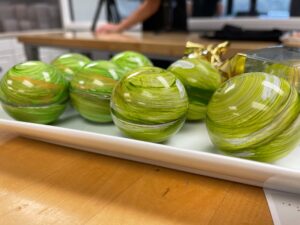 Once the colors created with cocoa butter are set, Mitch tempers the chocolate to get it to the right consistency to create the hollow balls for the bombs. “Now you’re going to have to build them. You’re halfway done. This isn’t barbecue,” joked Mitch. 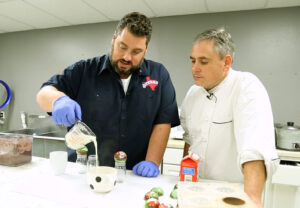 The bombs are filled with a cocoa mix created here and marshmallows of course, and melted together with the help of a pot and blowtorch. After some seriously specific instructions on the precise method of placing things together, I made my first hot cocoa bomb for Christmas!

But now the fun part! Pouring some hot half and half on the creation to see it crack open and create a masterpiece. After stirring it up, it was time to toast to the holidays. “It’s like one of the things after you drink it you’re like, ‘That is good. You’re right. That is good. Then you get bombed on a bomb,” joked Mitch.

In a year where everybody could use a little more sweetness in their stocking, getting steaming hot cocoa bombs at Truman’s truly is a terrific stop on The Texas Bucket List.