Harlingen – During the winter, most of Texas has to deal with cold weather, the occasional freeze and trees without leaves but that’s not the case in the Rio Grande Valley.  Folks from all over the country congregate to this part of the state, some estimate as many as 100,000 winter Texans call the valley home between October and March.  That’s probably because round these parts, it feels more like spring than snow season. 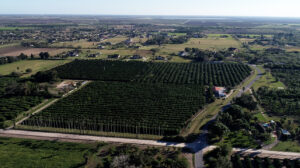 Now one of the biggest attractions to tourists and Texans alike during wintertime in these parts is the citrus and Granny Clare’s in Harlingen is just one of several stops to get your squeeze on. Corina Aguilera took us on a tour of this 50-acre farm that sprouted back in 1994.  Bill and Claire Brighten originally owned the orchard but in 2015 a local doctor decided to diversify her portfolio by purchasing the place for produce.

“One day, she was just passing by and she saw the for sale sign and she said, ‘I’m going to buy that orchard’, and she did. She doesn’t want us mentioning her name,” said Corina. 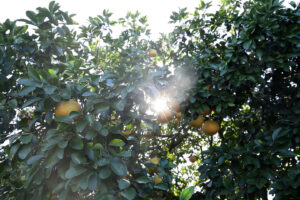 The one thing we do know is December through January is the optimum time to make your way to the orange grove. “That’s when they’re the sweetest,” stated Corina.

“You’re looking at the color. You want to make sure that there’s no insects that have been eating into it and they’re good to go,” Corina explained while showing us one of the grapefruit trees.

Now citrus is native to the orient and it wasn’t until the 1880’s that orchards were established in the Lone Star State.  Fortunately, the fruit has blossomed into a big industry that includes oranges. 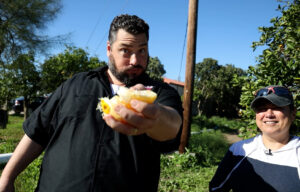 We’ve experienced a lot of things in Texas, but there’s nothing like experiencing fresh fruit off a tree. It is just mind-blowing how different it tastes. Of course, everyone is excited to try it. We were willing to move on but comparing apples to oranges didn’t last too long.

“This is where we separate the Mars oranges, the navel oranges, and the grapefruit,” Corina explains while showing the separator. Now you can’t help but notice not all the oranges are super pretty.  “The uglier, the better, I say,” said Corina.

Now if you’re not into peeling your own, the fruit trays are some of finest I’ve found and they too are all done by hand. “This is our kitchen area where we prepare the trays. The fruit trays, and this is where we cut them up. The ladies here, they’re professionals at it. They’ve been doing this for … She’s [Thelma] been doing it for five years,” said Corina. 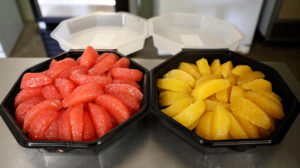 Watching Thelma cut up citrus is like watching a world class surgeon doing a delicate operation. “Make sure you take off the white part of it because it’s what makes it tart. That’s what makes it tart, so you want to make sure all of it is gone.” The navel, you go straight to it. It’s just one time,” explained Corina. 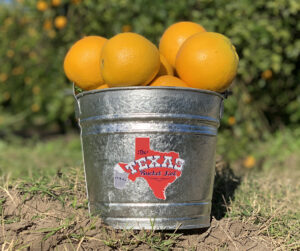 Now it was time to try one of these deliciously arranged fruit trays, but where do we start?  “You want to go with a grapefruit first.  If you do the orange first, though, grapefruit would be too sour,” explained Corina.  It was the most juicy, sweet, perfect grapefruit worth getting goosebumps!

“Yes. That’s why people keep coming back,” stated Corina. Life is short so you’ve got to be sure you squeeze every last drop out of it and a trip to the Valley for some citrus because Granny Clare’s Citrus is well worth the stop on The Texas Bucket List!