MATHIS – BBQ is more than food in Texas, it’s a tradition.  And the tradition you’ll find at Smolik’s Smokehouse in Mathis runs deep, thanks to their Czech roots and a right of passage has passed down to Michael Smolik. 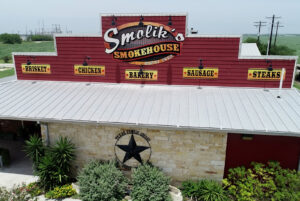 Michael’s great, great, great grandfather Valentin Smolik was the first Smolik to seek out a life in the Lone Star State when he immigrated with his family to Texas in 1868 and over the years the Smolik’s have been grounded in farming and ranching.  That is until Michael’s Grandfather, William Henry, started a meat market in Karnes City in 1928. Then In 1949, Michael’s father Bill bought the City Market in Runge. “I had a real Texas type, crazy Bohemian pop,” joked Michael.

It was there that Michael started to learn the art of sausage making and BBQ. “I’ve done this basically since I was a kid. One of the first things I remember doing was tending fires for my dad. When I was in high school, I got to butcher cattle and stuff like that. It was good football training, I should say,” joked Michael.

Michael eventually met a girl named Gail and moved to Mathis to start a family but soon after started their own Smokehouse to keep the family tradition of Texas BBQ alive and well.  “We’ve been married since 1980,” stated Michael. Where does Michael think he’d be without Gail? “Prison,” joked Michael. This place is a lot better than that and all that history we just went through, you can find it all on the walls. “Their family’s been in this county and in this city since dirt was invented,” joked customer Damon Ellis. 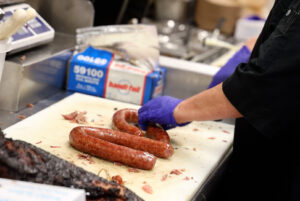 Since 2009, Michael’s right hand man has been John Rodriguez. “Working with the Smoliks, it’s just been an honor. He’s a smart man. He taught me stuff about smoking meats that I never knew before,” said John Rodriguez. John is in charge of lighting the fires each night but Michael makes sure the wood they use to cook is up to his specifications.  So much so, they have a specific sort of lumber they look for.  A combination of hickory and mesquite.

“This mesquite we get from Sandia is grown.  It’s Sandy Soil, the mesquite is lighter color. It’s a milder fragrance. It’s not as biting and you don’t find as much rot in it,” explained Michael. The Smolik’s go as far as removing all the bark off the wood.  Michael believes it makes for a purer flavor. “When you got wood, we use mesquite sometimes five, 10 years old, sitting out for ages. We take all that outside layer off. It’s a meticulous process to get to the end product. I love barbecuing. Absolutely. Love the smell and it’s like perfume to me,” said Michael. “I’ll put this barbecue against anybody in the world, really,” stated John. 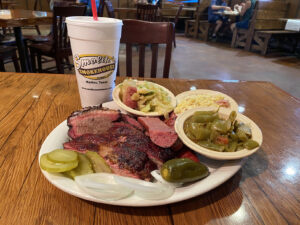 The three meat plate at Smoliks, along with three incredible sides. The green beans, the cabbage, and the creamed corn look amazing, as do the brisket, ribs and sausage. We’ll go with their namesake, the sausage, a nice little cheddar jalapeno where you can smell that spice. You can never beat a good jalapeno cheddar sausage. We know that firsthand.

The ribs are thick and meaty. It’s so heavy, I dropped the thing! Not an overpowering taste. Just a good pork flavor. Tender as can be. “The ribs… You don’t ever forget the taste,” said customer Virgie Ortega.

Onto the brisket, and we’re just going to cut it with a fork because that’s all you need. Some incredible smoke flavor on that brisket. “It’s good, if you like barbecue,” said Damon. The three unique textures of the bark and the fat and the meat just blend together, making for some incredible bites. 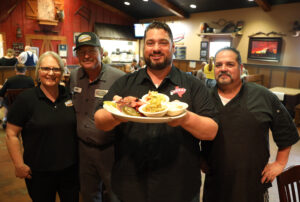 “I think we can stand up to any… I don’t want to sound proud. I think our barbecue’s good,” expressed Michael. It all comes down to family tradition at Smolik’s.  Something that’s been going on for generations of Smolik’s and that’s something Michael hangs his hat on. “The best thing a father can do for a son is teach him how to work and how to make living. God’s important, and I should’ve put that on top, but you can’t have life without being able to make living. You can’t have a dignified life without making a living. For that part, I’m grateful,” expressed Michael.