Del Rio – During our travels over the years on The Texas Bucket List I’ve always been enamored with Lake Amistad down in Del Rio. When we stayed at the Lodge at Sanders Point, the lake showed off its natural beauty. And when you head down the road to Langtry to visit Judge Roy Bean’s Jersey Lilly, you can’t help but stare out onto the shore as you drive by. So after seeing the lake shine over so many visits to the area, we finally decided to fish it.  On a cold January afternoon. 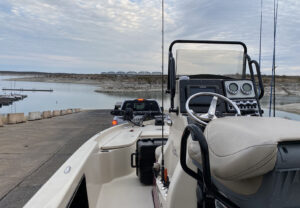 “Well, we get all three seasons in one day sometimes,” joked Raul Cordero.  Raul is a former roughneck who now owns Farwest Guide Service and he braved the brisk air to take us by boat around the lake I’ve always loved. “We have beautiful water, we have a lot of deep water, and we have a lot of good fishing,” said Raul.

Raul has been roaming around this lake his whole life and it all got started when his family moved to Del Rio when he was a boy. “I remember the move to Del Rio because it was the happiest day of my life. When my dad said we’re moving to Del Rio, I couldn’t wait to get here. I’d been fishing this lake years prior to it, because we always had family here,” explained Raul. 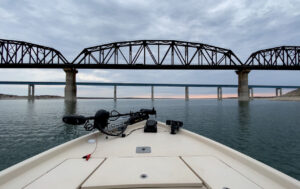 Now he has a family of his own. So we did what most Dad’s love to do. Get out on water, way far away from the worries of the world. While it wasn’t as warm as I was hoping, “We don’t have very many cold days, other than today when we chose to fish,” joked Raul. The sights were as surreal as I imagined. “It’s about half and half in the US, half in Mexico. It’s 64,000 acres, about 160 miles of shoreline when it’s full, and we’ve got pretty close to 200 foot deep in some areas. It’s something you have to come and experience. I mean, it’s a gorgeous lake,” said Raul. 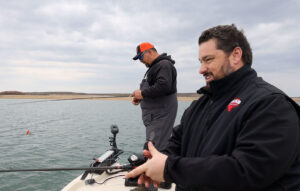 Known for its bass fishing, that’s what most anglers are angling for when they come here. “Bass fishing is more of a challenge. They’re a lot tougher to catch,” stated Raul. As we found out, after watching Raul’s uncommon method of calling fish, sort of recreating the sound of a feeding frenzy.

We started jigging, and jigging, and jigging . “A big fish is only a cast away. That jig technique, it’ll wear you out, and then you chuck that big umbrella rig we were throwing for a while, that one will wear you out too,” joked Raul. Turns out, I might have been doing it wrong. “Like they say, it’s not the size of the worm, it’s the way you wiggle it, so that’s the secret to it,” said Raul. 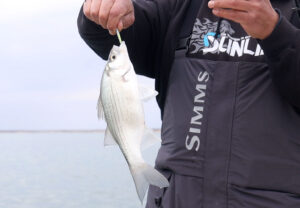 Raul eventually reeled a few white bass in the boat and these beautiful fish are fun to see.  “It’s like anything else, being at the right place at the right time, timing it right,” stated Raul.

But what’s most surreal about this lake is most of the time, it’s quiet. It’s peaceful. It’s tranquil.  From the fish in the water, the waterfowl flying around, to the aoudad roaming the shores, Lake Amistad is a sportsman’s Shangri-la, a nice place for naturalist, and it’s right here in the Lone Star State…..and in Mexico. “This to me is the end of the world. This is as secluded as it gets. I hear from a lot of customers, ‘This lake’s been on my bucket list for many years.’,” said Raul.

So cast a line in the cool waters of Lake Amistad and enjoy a larger-than-life lake right here in the Lone Star State. “This is my passion. I love it. I love it,” expressed Raul.