La Porte – On the east side of Houston, along the bustling Buffalo Bayou, you’ll find the lively ship channel along a little section of La Porte.  With a rampant number of refineries in the area, it’s sort of shocking to come across one of the most sacred sites in Texas here. But when you see the spire of the San Jacinto Monument standing tall amongst the smokestacks, you know you’ve reached one of the most significant spots in the whole state, the San Jacinto Battleground. 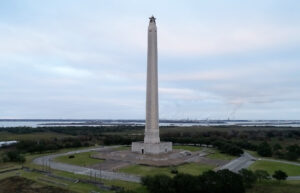 “The battle that took place here had a big impact, and having people understand how one 18-minute battle here, really did impact the world,” explained Lisa Struthers, the library director.

Lisa Struthers, David Avila, and Andy Smith took us on a journey of the San Jacinto Battleground where on April 21, 1836 General Sam Houston and 800 Texian soldiers defeated Santa Anna’s force of 1,400 and proclaimed Texas its own nation.

“Being a Mexican-American Tejano born here, I kind of thought, back then I’d probably go be on the Texian side, helping those men at the Alamo, or here at San Jacinto. I just always loved Texas history,” said David Avila.  David is the interim director of the museum and has been working here for 22 years.

“My father’s side of the family is from Zacatecas. Santa Ana was down there in Zacatecas before coming here to Texas, putting down a revolt over there. And again, for some reason I’m thinking, well, I probably would have been on that. I imagine my family being on that rebellion side,” said David.

“Interesting to hear the stories about people, why people did what they did, what their lives were like, just kind of really interesting to me,” said Lisa. 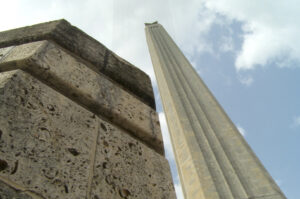 “We look at Texas history beginning with the Spanish conquest of Mexico, so some of our earliest things are pre-Colombian artifacts. Since the last veteran who fought at the Battle of San Jacinto died in 1913, we cover up through that time period,” explained Lisa.

“It kind of encompasses a lot of Texas right here,” stated site manager Andy Smith. Smith is a 5th generation Texan, Andy took us around the 1,200 acres of the battleground.  “The historic significance of it is outstanding, but it’s also natural beauty. There are spots where you can forget you’re in the middle of the metropolitan Houston area and actually transport yourself back to 1836 and you can kind of feel what those men felt like,” explained Andy.

During the battle, 9 Texian soldiers lost their life while 630 Mexican soldiers lost theirs, a lopsided win that sealed Texas’ Independence. “This is the Brigham Monument. This was the first real memorial placed here at San Jacinto. This was put up in 1881 on the grave of Benjamin Rice Brigham, but his compatriots that fell at the battle of San Jacinto were buried nearby. So this was to honor the men who died on the Texas side at the Battle of San Jacinto, or were wounded and died from those wounds a little bit afterwards and were ultimately buried here. So this is the oldest monument in the park,” explained Andy. 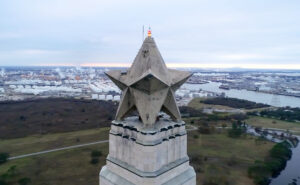 Inside the museum you’ll find all sorts of artifacts, with General Sam Houston looking over them in Stephen Seymour Thomas’ original painting of him that stands over 12 feet tall. “People started donating things to the museum. Things that their grandparents had collected, their ancestors who lived here during the Texas Republic had. And so it ended up that we had a good number of things that we can now show to the public,” explained Lisa.

“We have a ring that Sam Houston’s mother gave to him. When he was a teenager, he joined the army and his mother gave him two gifts, she gave him this ring right here, which is inscribed with the word honor inside. The reason it’s inscribed with honor, she said, ‘This should be a creed that you follow for the rest of your life.’ And he wore that ring until his death. But that’s a very nice piece of history that we have there,” explained David. 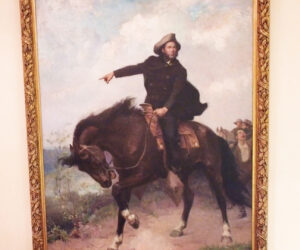 Now a trip to the San Jacinto Memorial wouldn’t be complete without getting a sky-high view of the battlefield. The Battle of San Jacinto didn’t just gain Texas its independence, it led to Texas becoming a state which helped the U.S. achieve its Manifest Destiny, completely changing the landscape of the world.

“If you’re a Texan, you got to come to San Jacinto. I don’t understand why this wouldn’t be first on your bucket list. If it wasn’t for San Jacinto, there would be no Texas. There’s just no two ways about it. We’d be part of Mexico. All the other battlefields are significant, but this is number one,” expressed Andy. Andy’s passion personifies how true Texans feel about this powerful place in Texas lore.  The commitment to freedom over tyranny.  The commitment to Texas independence.  A commitment to the ideology that is Texas and the people who fought for that as Sam Houston said on the night before the battle.

“We view ourselves on the eve of battle. We are nerved for the contest, and must conquer or perish. It is vain to look for present aid: none is at hand. We must now act or abandon all hope! Rally to the standard, and be no longer the scoff of mercenary tongues! Be men, be free men, that your children may bless their father’s name.” – Sam Houston