Burleson – Just south of Fort Worth, we found this fine pizza joint that happens to have a pie as big as the metroplex! But before we got to baking, we took some time to get to know the owner of the Moontower Pizza Bar, Amber Rouse.

“Well, we wanted to open up a restaurant, like a bar restaurant, but there wasn’t pizza down here,” said Rouse.

Amber and her husband Paul opened up the Moontower Pizza Bar in 2016 and this is a stretch from her former profession. An accountant! “This is a 24 hour a day, seven days a week kind of job,” said Amber. 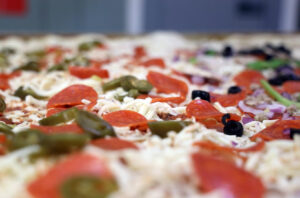 Now Moontower isn’t named for the pie in the sky, instead it’s an homage to the famous towers in Austin that happened to be in a pretty well-known movie set in the Lone Star State, Dazed and Confused. “Now, if you could find me Matthew McConaughey, I would love to have him come in. Matthew McConaughey, if you’re watching,” joked Amber. Would McConaughey get pizza here?  It’d be a lot cooler if he did.  “Well, who doesn’t love pizza,” joked Amber.

Now Moontower has your symbolic slices of pie but if you want to get something a little bigger, there’s a few options.  “We make a full moon, which is a 30-inch round pizza. And then of course the Bus. Eight feet by 32 inches,” explained Amber. I’m 6” 2”, this pizza is more than a foot and half taller than me! “Nobody realizes how big it is until it’s there. And then they’re like, ‘Oh wow!’,” said Amber. 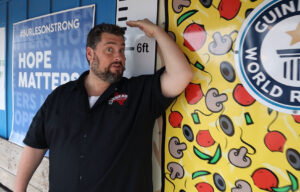 Getting into Guinness took more work than just making a massive pizza.  Turns out there’s quite a few steps to take before being considered. “You have to have it on your menu for a year before they’ll even come and look at it. And you have to have sold at least one. So we did have it on the menu for a year, and by the time Guinness came, we’d probably sold three or four. But after Guinness came, it was an explosion,” explained Amber. 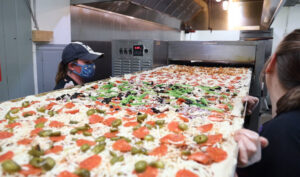 To make this monstrous pizza, Amber starts off with four and half pounds of homemade dough and she makes that dough do what she tells it! This part of the process is the most tedious and takes the most amount of time.  “So there is no perfection to an eight foot pizza. You can’t throw it in the air, can’t toss it. It’s all just a little bit of love and massage, right? Just kind of get this pizza to do what you want it to do.” explained Amber.

Next up is the sauce.  Five pounds of homemade marinara sauce. That’s followed by ten pounds of cheese. When this is all said and done, how much does this thing weigh?  “I really do want to say it weighs close to a hundred pounds. It’s heavy. The dough gains weight, I feel like,” said Amber. 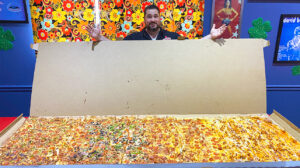 And we’re breaking the bus up into four different sections of toppings, but pepperoni is a must. Once it’s covered, we get to cooking. Cooking eight feet of pizza takes a little time but who doesn’t love watching cheese get all ooey and gooey!

“She has her own recipe for the crust and there’s no crust like it. I’ll cut the rest of the piece away just to get to the crust,” said customer Andy Pickens.