Jourdanton – Just south of San Antonio you’ll find the community of Jourdanton.  Situated smack dap between Pleasanton, Poteet, Charlotte, and Christine, Jourdanton is a hub for how things are going around Atascosa County. To find the most popular place to talk about the day’s events, just follow the rays of sunshine to the Sunshine House Coffee. “I’m really proud of how it turned out,” said owner Audrey McCleary. 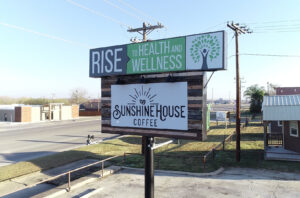 Audrey and her husband Kevin are the couple that got things roasting on this coffee shop for the community. With friends and neighbors pouring into the place to show their support, the reason Audrey, a former ER nurse, and Kevin created this place wasn’t because they wanted to, it was because they needed to.

“It is a hard story to tell, but it is our story. In 2017, both of our children were killed in a car accident. On their way to school, they went to Jourdanton. Our son was in sixth grade, he’s 11, his name is Tanner and then Madison was a senior, she had just turned 18 and I’d actually already been in the ER that day at work and got a call from Kevin who was one of the very first people on the scene. And so, one of my coworkers drove me to the scene. So, we were there at the scene of the accident. And so, seeing someone do CPR on your children, I’m thinking of going back to that in the ER was more than I wanted to do. And so, when all your plans for what you had planned for your life change in an instant, you’re left thinking, ‘What do I do now?’,” explained Audrey. 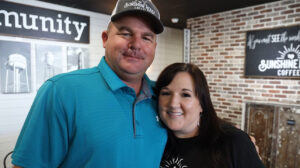 Community support poured into Audrey and Kevin’s life. “You know, we leaned on each other a lot. I know a lot of couples kind of turn on each other or do the blame game and no it was your fault. I don’t know, instead of pushing us apart, it just drew us closer I think,” said Audrey. “Between us, religion, God. And like I said, community of friends, that’s the only way, if not, then I don’t know how anybody would be able to do it,” expressed Kevin.

To keep their memory alive, the Sunshine House Coffee was created.  A chance to share in Madison and Tanner’s love for the occasional stop at coffee shops across the state but also something else.

“It’s more than a fancy coffee shop. You know, there’s lots of towns that have fancy coffee shops. That’s not what this is. This started as what I would call, I guess the medicine that this community needed to heal,” said customer Trace Blair. 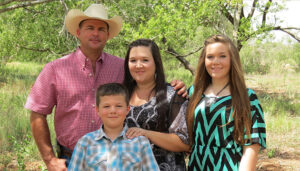 Audrey wanted to keep the memory of her children thriving through the community, so she created a movement based on caring for each other.

“Our kids were amazingly kind kids. They were just they’re empathetic and never wanted anyone to be left out and stood up for someone who’s being bullied, and they were awesome. And so, they’re a legacy of kindness, I wanted to keep. I had this crazy idea to encourage people to do acts of purposeful acts of kindness, and then put the hashtag spread kindness for M and T. And so that we can see kind things being done in honor of our children. And it was just amazing how it took off here,” said Audrey.

At the front door to the Sunshine House Coffee you’ll find a jar full of bright blue bracelets that serve as reminders of Madison and Tanner and encourage those acts of kindness.

“There are so many acts of kindness done for strangers and their owner, and even not only did it all over our community, but then all over Texas, the United States, and even the world,” expressed Audrey. 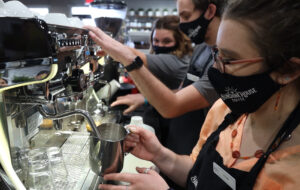 “The bracelets are common in this community. You can’t go a day. If you look, you won’t go a day without seeing someone wearing it,” said Trace.

“Seeing people with the bracelets, doing acts of kindness for people there, it was just, it’s amazing. And to know that people are remembering your children and perpetuating their kindness legacy. So that was amazing for us,” said Audrey.

The healing didn’t stop there.  To help others who have lost a child, Audrey created a wall dedicated to the young souls who have left this earth and their families too soon. Each radiant circle has a name, 51 names in all.  “All parents who’ve lost children have an automatic bond, cause you’re in the club that no one else wants to be in. You know? So, it automatically gives you a bond. And so, no, it was easy to talk to most of these parents, of course emotional, but a lot of them really appreciated being able to share their story of their children. While difficult, it’s rewarding as well, cause we all want to talk about our kids,” explained Audrey. 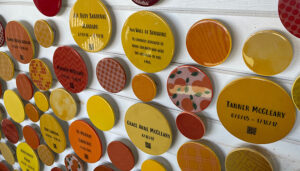 “The legacy lives on with her kids. And she’s not only included just her kids as evidenced by the wall outside. I mean, all the others that have lost children,” said customer Benita Muckleroy.

“Through their faith, through their perseverance and through their commitment to honor the memory of those kids, they have turned a tragic situation that they couldn’t change into something that has had such an impact on so many lives,” expressed Trace.

“Even though it was cut short on life, they did make an impact that people noticed, great. That’s all we could ask for. And they still are, which is helps our hearts a lot,” expressed Kevin.

Audrey and Kevin have to drive past the scene of their children’s accident every day, it’s only half a mile from their house.  But something at that home is about to change. “We thought about moving but then you’re moving away from where you have memories of them, not moving towns, but moving houses. Maybe in the future, but right now that’s where all our memories are of them. So, we haven’t touched their rooms they’re exactly how they left them. So, but we that’s on our project list because starting actually tomorrow nights, starting tomorrow night, we start our foster parent training classes. So we’re going to be foster parents,” said Audrey.

Life is already too short. Madison and Tanner never got to experience the amazing journey of attending college, starting a career or becoming a parent but Audrey and Kevin did, and they’ll do it again.  “We did tell them that we would take teenagers, bratty, stinky teenagers,” joked Audrey.

“The little moments turn out to be the big moments and the moments you miss the little things. Take lots of pictures, hug them every day.” “No matter how bad it gets it’ll always be worse, no matter how bad they mess up,” expressed Audrey and Kevin.

“I think a lot of us have kept that kindness while we’re especially with what we’re going through right now. I think you’ll see this whole community is pulled together,” said Benita.

“The tragedy that was the loss of those kids had such a tragic impact on our community. This coffee shop is fixed that,” said Trace.

“We love what we are doing here and hope other people learn about us and come see us and see what we’re doing. We’ve love that.” said Aubrey.