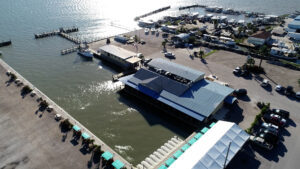 Robert grew up on this point after his parents moved here from Houston in the mid 70’s.  “It was way more commercial in the very beginning. We unloaded shrimp boats, oyster boats, fishing boats, sold all the fuel for our area, and now it’s turned into more of a restaurant,” explained Robert.

Robert loves owning a restaurant and loves to spread happiness. “Being on the water every day and meeting all the different people. They’re fantastic. The happy ones are happy and the unhappy ones are still happy,” said Robert. 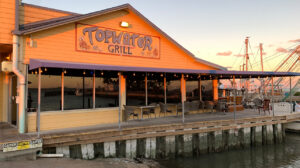 One of Topwater’s most popular dishes? “How about fried shrimp,” said Robert. You are correct and they go through tons of shrimp each and every month. “Close to 900 pounds of shrimp every week,” stated Robert. 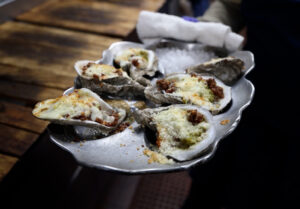 I was up for a little smorgasbord of seafood so Robert rallied some really good recipes including oysters diablo, pan seared oysters and royal red shrimp.

First we prepared the pan seared oysters which are freshly shucked oysters get breaded and thrown on the grill with some blackened seasoning.  Those get placed on a plate with squash and crawfish etouffee. 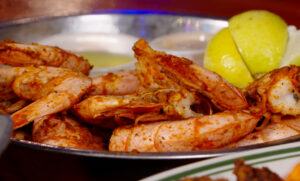 And last but not least, we inquired about their unique shrimp, the royal red shrimp. “We found these on a vacation in Key West, Florida, at one of our favorite restaurants down there, and the nice guy told us what they were, they’re Royal Red shrimp. They catch them in two places in the world; one is in the Texas Gulf Coast from Texas to Key West, and also Argentina. We get them for both places. So deep, they’re almost a mile deep underwater, and they were unheard of. Now, you can find them almost everywhere. They taste like a cross between Alaskan King crab and lobster, in the shape of a shrimp,” explained Robert. Those are simply prepared with seasoning. “Here’s our secret recipe that we don’t tell anybody. It has so many ingredients, it has Royal Red shrimp and old Bay seasoning,” said Robert. 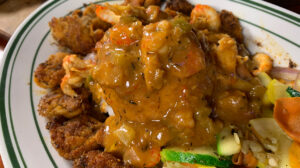 This Oysters Diablo, covered in those jalapenos and garlic with cheese is melted all over that oyster is divine. Two of my favorite things, jalapeno and garlic make for an amazing flavor and you combine that with those cheeses and that fresh oyster and I would definitely say the oysters brought me out of my shell!

The texture on that shrimp is amazing. It really is like a lobster. It’s not chewy or squishy, it just breaks apart, and the flavor, it’s like the texture and flavor of lobster. No wonder these shrimp are so far, way down in the ocean, they’re hiding from us!

Finally, the pan seared oysters with a side of crawfish etouffee, you can never go wrong with that either. We may be out on April Fool Point, but mama didn’t raise no fool, this food is fantastic! 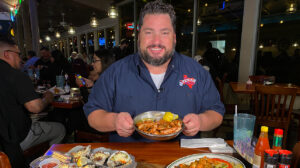 “I would just tell you that they’re not going to beat the food for one. The price is really good, but the hospitality is off the chart,” said customer Larry Birchfield.

If you ever set your sights on San Leon and you’re looking for some serious seafood, Topwater Grill will reel you in, because it is well worth the stop on The Texas Bucket List!