San Antonio – On the northside of San Antonio, on the shining lights of Broadway, is a sandwich bistro with a big following.  Zito’s Deli is not a dive by any means but it is a bit difficult to find but you won’t be disappointed. 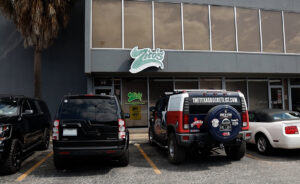 “I love that it’s hidden over here by the airport in a kind of this little divey restaurant, in a kind of area that’s not that great, but it’s my secret little hideout,” said customer Allison Singleton.

Brad Zito is the second generation of sandwich makers at the business that began in 1974 with his father who hailed from Rhode Island. “There was one deli, an Italian deli here in San Antonio, and he wanted to open up another one,” said owner Brad Zito.

Brad’s father passed away in 1996 so Brad ran Zito’s with his mother till 2015 when he finally let her retire at 93. “Yeah, she would still probably be working, but we wanted her to at least enjoy the last few years of her life,” stated Brad. 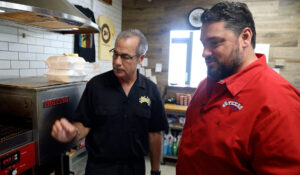 As for Brad, he’s always been a part of the business and even managed to find a spouse in between sandwiches. “I mean, I always worked here my whole life, but after college, I started working here and met my wife at my Callaghan store, got married and three children later,” said Brad.

“If there’s a place that has a Serious sandwich, you better try that Serious sandwich,” said customer Mike Hockersmith. “Y’all are going to have one, right,” asked Allison. Seriously? Of course!  Brad took us to the back to get started. 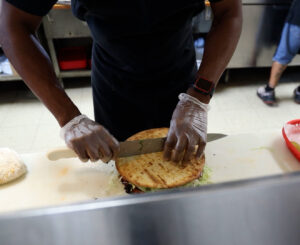 “We sell approximately 100 whole Seriouses a day. A whole Serious is enough for two people. So we have to prepare the day before. The salami side will have provolone cheese, ham and salami. And then on the other side of the sandwich, we’ll have what we consider the cheddar side. And that’ll have a cheddar and another type of ham. And that goes on the flatbread,” explained Brad.

“We got the onions, olives, tomatoes, and then our signature spices. We have Italian blend spices that we blend here ourselves. Then our shredded lettuce. We want to have it, especially when they’re to go,” Said Brad.

“This is right up there with greatness for me. This makes a day a good day,” said Allison. 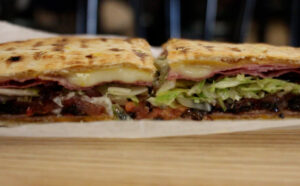 When I grew up in Round Rock, we had a little sandwich place called Alvin Ords. It was my favorite hangout back in the ’80s and this sandwich tastes a lot like it. “I try not to tell anybody about this because sometimes it’s best to just keep your little secrets to yourself,” said Allison.

All those ingredients finely chopped really do come together to make an excellent flavor. “It’s got everything in it. You really don’t need anything else,” stated Mike.

Well, if you’re ever in San Antonio looking for a sandwich with a zing, come into Zito’s. It’s well with a stop on The Texas Bucket List.“It felt really fulfilling to continue on and to hear customers thank me for continuing on the tradition,” expressed Brad.