San Leon – Back in the late 2000’s Texas was home to nine distilleries, today there’s nearly 200! Whiskies and vodkas a the most popular but down in San Leon we found a distillery doing something a bit different.  Located southwest of Houston, you’ll find sunny San Leon sticking out into Galveston Bay.  Famous pirate Jean Lafitte used to sail these very waters but now there’s a watering hole he would fit right in at known as the Buccaneer Bar at the Railean Rum Distillery. 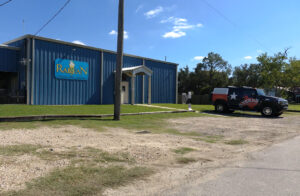 The former wine sommelier still enjoys a glass a vino but when she sails the seas of southeast Texas, a whole new side of Kelly comes out.  “Back when we did it all the pirate stuff, people just thought there was something wrong with us but now pirates are cool,” said Kelly. 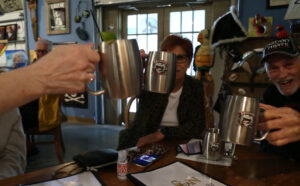 While living out her not-so-secret scallywag lifestyle with friends, they came up with a pirate plan not to pillage or plunder but rather produce their own product.  “One night, we’re drinking. We’re all dressed as pirates, we’re having this pirate party. And there was a bottle of rum and it was not great. I wish I could remember what it was, I don’t remember what bottle it actually was. But everyone’s like, ‘Man, that Rum’s awful. What is that? That’s terrible.’ And I don’t know, just my husband and I goofing-off, we’re like, ‘Yeah, we could make better rum than that.’ It helps that I got a background in biochemistry, and then my husband’s actually a chemical engineer,” explained Kelly. 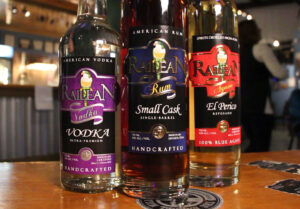 So, the pirate pair decided to set sail on their own adventure and created Railean Rum.  “The laws that constitute a rum are, it’s got to be made from sugarcane juice or sugarcane molasses. As far as, how do you take the proof off the still? Do you age it, do you not age it? Do you flavor it, do you this? You can do a lot of different things with that. Where a lot of other spirits, you have this set of rules that you can only use X. For that reason, you’ve got stuff all over the boards. Yeah.” Yeah. Which kind of makes it so piratey because you really didn’t have any rules with it. Now, on the other hand, there’s a bad side of that, which is that there’s a lot of pretty rough and bad rum out there because you don’t have a lot of rules. So, you can get away with cheapening things up and mass producing and coloring things instead of barrel-aging, that you can’t get away with bourbon and things of that nature,” explained Kelly.

“The science of it is what fascinated me when I first started doing this,” stated Kenny Bradshaw. Bradshaw is a former merchant of the finest ships on the sea, well he sold boats.  But when he retired, he joined Kelly’s crew to help create the claps of thunder being produced at Railean’s. “When she first told me she was a sommelier, I didn’t know what that was because I was a boat salesman. And so, when I decided to look it up, I also figured out then that I did not know how to spell sommelier. So, I had to do some research to figure out what it was I was even dealing with at that time,” explained Kenny. 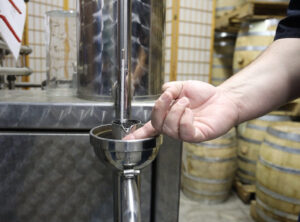 Kenny took us around the distillery that creates all sorts of spirits for the Buccaneer Bar. “They’re 15-gallon barrels, they’re American White Oak. And we use a really heavy char so that we can get a lot more color and flavor from them, because the American White Oak has a natural vanilla flavor to the wood anyway. And so it brings out a lot of those colors and flavors. And what we age in a 15-gallon barrel, we get a lot more coverage area in a shorter amount of time than if we were using a big traditional barrel,” explained Kelly. 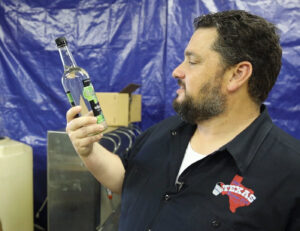 “The distilling is fun too. I mean, who doesn’t like being doused in molasses, and you know. It is, yes. It’s a very sticky, labor intensive mess over there, definitely,” stated Kelly.

After bottling a little bit of rum. It was time to toast my hearties! “It is truly by design to get it that way, because what you want is ethanol alcohol. It’s the same stuff that goes in your car, just a much better grade of it,” explained Kenny.

“So that’s very unique for a rum, very few rum companies are going to use a new barrel. So nothing added to it. No color, no sugar, no flavors. You can totally sip it, but it’s 30-some dollars a bottle. So, it’s not too pricey to go ahead and mix it either,” explained Kelly.

So, if feel like sailing the seas of the Lone Star State, start your journey at Railean’s Rum in San Leon.  The proper place for a pirate or any person to experience the tropical side of Texas.