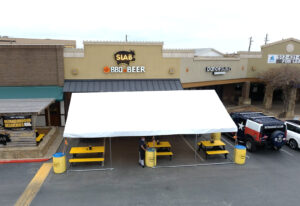 Mark started off in a food truck but it didn’t take long to curate a cult following for these stacks of sauce and Q. “I wanted to be different from everyone else. And then the two meat three meat plates, because I figured there’s a lot of those. I wanted, again, since day one 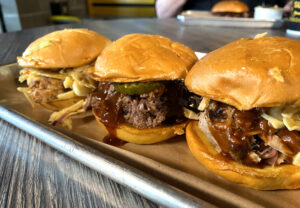 , it was just going to be about barbecue sandwiches,” said Mark.

Mark is a self-taught barbeque man and he didn’t just master the ways of Texas, he took the time to learn every region’s style of barbeque and made each into its own style of sandwich. “I learned about Memphis. I learned about Carolina, I learned Alabama style. And so I just learned the different ways. And I was like, man, there’s a lot out there and there’s. I think I can create sandwiches based on the different regions,” explained Mark. Each sandwich has a very unique name. “The Notorious P.I.G, the Texas O.G, The Texas Trill. The Chicken W.A. I mean, it’s just a lot of play on,” said Mark.

The grinder we’re getting down with is the McDowell, a rib sandwich that has a huge connection with the class 1988 flick Coming to America. “Coming to America is huge. I mean my generation, right? And so we played on them, McDowell and the whole concept,” stated Mark. 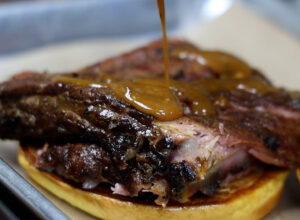 Mark got things started by pulling off a rack of ribs. “So we get them to the point where it’s kind of… I’ll take those out. So we’re going to make sure that everything stays intact. Now we’re going to slide the rib meat to the sandwich. So we’ve got a Backyard Red, which is our traditional red sauce and then our gold sauce, which is a mustard based sauce called Gold Rush. And that’s going to make the Soul Glo. A combination of the two. So then we’re just going to finish it off with some pickles and onions. Simple. But, good. And there it is. That’s the McDowell,” explained Mark.

Well it may not have a Sesame seed bun, but the McDowell looks pretty darn impressive. It’s dripping all over the place. After carefully taking a bite of the boneless ribs, sopped up in sauce is safe to say my love for this sandwich rivals Akeem’s love for Lisa.  The tenderness of the rib meat is ridiculous. Just like it falls off the bone, it falls apart in your mouth.  Then, every once in a while, you run into bark and it just creates a whole new texture and the sandwich.  It’s truly tangy and terrific and I definitely feel like I’m sowing my royal oats with this sandwich.

“Just sauces and things that they put on their sandwiches. That really makes a big difference,” stated customer Ben Naughton. 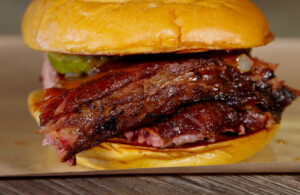 “I just wanted to let people know that there’s some other things out there that are really good too. Let me show you on the sandwich,” expressed Mark.

“You can go anywhere, and everybody claims that they do barbecue the best and that they’re the hands down original, OG barbecue place. But this is definitely, I think, the top tier place to come to in Texas,” Well eating like a king or a prince is easy to do at SLAB BBQ in Austin. All you have to do is order the McDowell because it is well worth a stop on the Zamunda… I mean on The Texas Bucket List!