San Antonio – There’s nothing more Texas than the Alamo.  The significance of this spot here in the Lone Star State is immeasurable.  It’s an obvious stop on The Texas Bucket List and maybe that’s why we blasphemously didn’t remember the Alamo.  It took us 200 episodes to get here!  Fortunately, that didn’t surprise the curator at the Alamo, Ernesto Rodriquez. “No, because we are a big state,” joked Rodriguez who has lived in the Alamo city his whole life. “I was born down the street at the old Brady Green hospital back in the year of our Lord, 1974,” said Ernesto. Ernesto enjoys kidding around. “I know it’s hard to believe, but I enjoy talking to people,” said Ernesto. 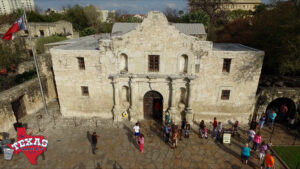 But when it comes to one of the most sacred sites in Texas, he takes that very seriously.  “That’s one of those things about Texans is that we love the Alamo and it’s our Alamo. I’ve been lucky that I’m able to do what I love. I looked at it as, I’m not just doing this as a job, I’m actually privileged enough to be able to be one of the caretakers of a collection for the people of Texas. And we take that very seriously,” expressed Ernesto.

Ernesto knows about every nook and cranny in this old mission and has tons of stories to tell. Guess you could say Ernesto’s job is to literally remember The Alamo.  “Yeah, it is. It really is. It is to just remember The Alamo,” joked Ernesto.

You’d be amazed at some of the questions Ernesto has to answer.  “Most people are like, ‘Why did you move The Alamo to the downtown?’ No, the town grew around it,” explained Ernesto. 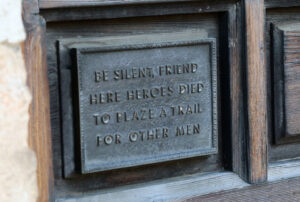 When it comes to the history of the Alamo, you have to start with its original purpose of the place, when it was established in 1718 as Mission San Antonio de Valero. “When you’re almost 300 years old, you need to be taken care of,” joked Ernesto. “The Franciscans were really great at founding missions. And the Texas missions are different from a lot of others because of the fact that people came in here willingly and they formed a community. And there’s actually an account that says by near the end of the mission period, you couldn’t distinguish the population of indigenous people living in the mission with the population living in San Antonio itself. It was just one group of people. They were now fully assimilated into the culture,” explained Ernesto.

In 1803, the Second Flying Company of San Carlos De Parras also known as the Alamo de Parras arrived at the Alamo and occupied it for 32 years, earning the mission the nickname of The Alamo. 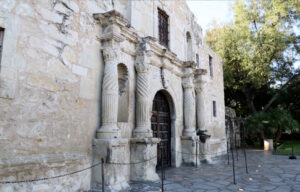 By 1835, Texians now longer wanted to be under Mexican rule so they told Mexican President Santa Anna to Come and Take It.  That led to the battle at the Alamo, an event changed the course of human history and created a temperament that all Texans share. “The battle’s always a focus because it’s such an important portion of our state’s history. You think about how many men died at the Alamo compared to Goliad? Well, there’s more at Goliad. They were executed. But we mainly remember the Alamo because they fought to the end. They did not surrender. And it’s that idea that we always have in our minds that, remember the Alamo, is because we don’t give up,” said Ernesto.

Today you can find artifacts from the battle and even personal belongings from the heroes of the Alamo like Davy Crockett’s rifle or William Barret Travis’ ring.  The walls and the grounds still echo here with history and Ernesto is always uncovering new discoveries. “This site’s always giving up secrets and it just takes a little while for them to come out,” stated Ernesto. 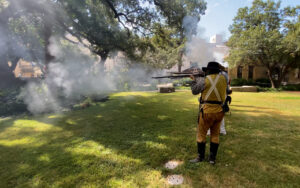 Generations of Texans have come here and generations well beyond ours will continue the pilgrimage here.  The place symbolizes everything our state is about.  Determination, tenacity, independence, and remembrance and grit.  It’s where a line was drawn in the sand and Texas became Texas.

“We’re a pilgrimage site for Texans. You’re a Texan, you have to come to the Alamo. That’s part of your birthright. You go home. This is it. This is home for Texas,” expressed Ernesto. “That’s one of those things about Texans is that we love the Alamo and it’s our Alamo.  This is where the Texan’s identity comes from. This is where we come to, basically as Texans, to rejuvenate ourselves, because you’re coming back to the birthplace, to the primordial waters of Texans. It actually gives you that sense of feeling because well, we’re Texan,” expressed Ernesto.