Gruene – Just about every weekend, Texans from all over the state paint the town of Gruene. The assortment of shops and restaurants is a reliable reason for many folks to come out here but the true Emerald in these parts is a dance hall with one heck of a history. 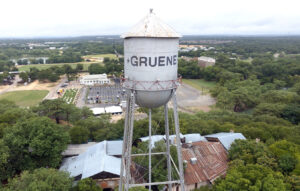 “I just love Gruene Hall. I love talking about it, love being here,” said manager Shane Roch. Shane has a unique nickname in this neck of the woods, he’s known as Roach and Shane has been hanging in this hall that was built in 1878 since 1998. Despite his time at Gruene Hall, he hasn’t moved up much in this music venue. “I’m a manager at Gruene Hall, yes sir. It’s a very long ladder. Well, my boss has been here for 47 years almost. So, it is a long curve,” said Shane.

The reason he’s not higher up on the management chart, the folks above him brought Gruene Hall back to life in the mid 70’s. “So, if you were up there having a beer at the bar (back then) and you had to go to the restroom, you’d have to kind of wade your way through a lot of junk and antiques or whatever to find the restroom back here,” explained Shane.

Apparently taking a little break from the bar led to an inspiring moment for owner Pat Molak and his business partner Mary Jane Nalley. “He said he had to go pee and he walked back there and said, ‘Hey, there’s a dance hall back here. We should do something with this place.’,” said Jeff. 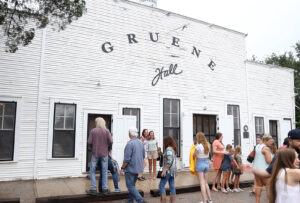 Nearly 50 years later, it’s now a fundamental stop for dancehall dreamers in Texas. “When I first started working here, it was like going to Austin City Limits to go to work every night because everybody you’d see on Austin City Limits would play at Gruene Hall on a Saturday night. It’d be like Gary P. Nunn, Jimmie Vaughan, Bruce, Charlie, Willie. Willie didn’t come around for a while, but you know, it was just like that. It’s like these are the famous people you can see on TV but you can also be in the same room as of work-end,” explained Jeff.

Texas music legend Gary P. Nunn knows a thing or two about taking Texas to the country and he’s played this hall countless times. “It’s cool to experience something that’s this old that’s been preserved and is vital as it is. It’s just one of those classic places and it is blessed to be sitting on the banks of the Guadalupe River where thousands and thousands of people come every weekend,” said Nunn.

“Gary P. Nunn is great. I mean, that’s pretty much the essence of the Gruene Hall music experience right there because that guy is a founding father of the Texas music scene as well. He’s just been hitting it for 50 years now, just doing the same thing every night, and nobody goes away mad. Everybody’s happy to see Gary,” said Shane. 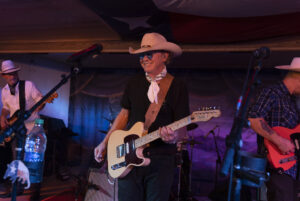 And that’s even though this open-air dance hall can get a little steamy on those hot Texas nights. “It’s hot as hell in there, but the beer is very cold. And that helps a lot,” joked Shane. “For years and years and years, all we had was the Hunter ceiling fans as our main form of air conditioning. Well, it’s a swamp cooler. We can’t get too modern,” joked Shane.

Gary started playing Gruene Hall not long after it re-opened in 1975 and he’s seen crowds of every size here. “It makes me feel good because I can remember it hadn’t always been this way. It’s really gratifying to have a packed house, a sold-out house, and everybody really being into what you’re doing,” said Gary as he looked to the sky to express his gratitude.

And it’s not just legends like Gary P. playing here. George Strait played this small little dance hall in 2016, and Garth Brooks did it in 2019.  “That was the biggest spectacle I’ve ever seen here. That was wild. It was really cool, though. Who brings their own jumbo-tron? Garth Brooks. Yeah, that’s who,” said Shane. 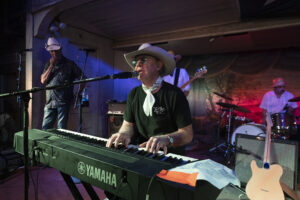 It doesn’t matter who you end up seeing at Gruene Hall because no matter the music, it’s always music to the ears on The Texas Bucket List. “It’s family oriented. We’ve been bringing our daughter here since she was like 14 years old. She’s seen Gary P. Nunn for probably the last 14 years since we’ve been bringing her,” said longtime patron Caprice Bush.

“It’s important that we preserve these mementos of our history because it’s so important, it’s a German dance hall, German community, German history, American history, and Texas history. It’s all intermingled and intertwined here in a lot of these communities around Texas,” explained Nunn.

“It’s honestly so cool, just to be around here with a lot of people that aren’t your age and just feeling at home and just feeling like you fit in perfectly is just the best feeling you could ever have honestly,” expressed visitor Jordyan Bush.