Fort Davis – Over the years on The Texas Bucket List, our trips to the Davis Mountains have always been a highlight in our adventures. The McDonald Observatory is one of my favorite stops we’ve ever featured on the show but the desolate destination makes this trip a little tougher than most. 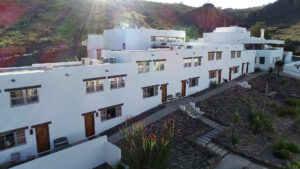 Now if you really want to soak in the sites here, you’ll have to find a place to stay and if you plan well enough in advance, the Indian Lodge situated in Keesey Canyon is a pretty cool place to do just that. “This entire area, not just the lodge, not just the park, but Fort Davis, Alpine, Marfa, these are destination places for people to come visit,” stated Jeff Williams, the Park Superintendent at the Indian Lodge State Park. 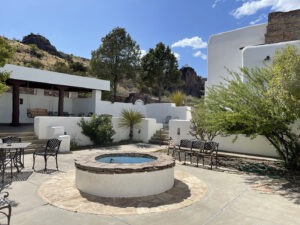 Built in 1935 by the Civilian Conservation Corps, the resort originally had 19 rooms but now there are 39 places for Texans to get a good night’s rest. “The architecture of the lodge is called Pueblo Revival, and it was built as a tourist motor court. This was an effort to get car touring in this part of Texas,” said Jeff. “What it is now is a historic site, and we work our best to preserve it. But when they built it, you have to put yourself in mind of the teepee, the teepee hotels, or Route 66, because that’s the vibe they were going for here is that off-the-beaten-path unusual tourist draw thing for the culture that went crazy for traveling around the United States right before and after World War II,” explained Jeff. 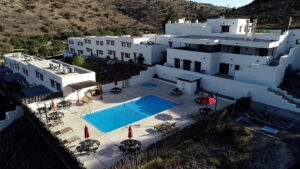 While taking us on a tour of his office, which used to be the dinner room of the lodge, Jeff gave us an architectural breakdown of the lodge. The building is made from adobe bricks, the majority of the materials used were harvested from throughout Texas to create a beautifully detailed lodge. “Because of the fact that it was built by the Civilian Conservation Corps, I think it’s important that everybody, at least, know a little something about that history, and that generation that went to work to provide for their families. It’s important that we honor that history, and preserve it, and pass that history along,” explained Jeff. 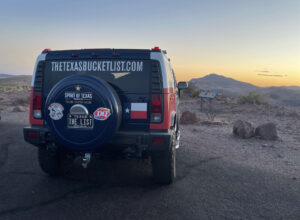 The surreal beauty of the white adobe walls sitting in the middle of a west Texas canyon is stunning and if you head up Skyline Drive next to the lodge, you can marvel at one of the most beautiful sunsets in the whole state. “I’ve become a collector of sunsets since I’ve moved out here. I have some pretty awesome sunset pictures,” said Jeff.

But when the stars come out at night, they truly are big and bright. “You don’t have to go to the observatory to observe the night skies, most of the time they are beautiful just with the naked eye from right here in the park,” said Jeff. 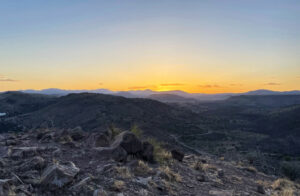 Popular with people who want to get away or have an amazing family adventure, chances are you’ll want to visit Indian Lodge more than once. “We came one year, and my folks turned right around and came the next year. They didn’t bring my brother and me with them that second time,” joked Jeff.

So if you’re looking for fun with family or just a romantic and relaxing trip to west Texas, pass on the teepee and lay your head at the Indian Lodge in the Davis Mountains, a magnificent stop on The Texas Bucket List. “You don’t get to see this kind of terrain, and these mountain features. You don’t get to see them everywhere in Texas. And if you have the opportunity, you ought to come see this beautiful part of the state,” expressed Jeff.