The Texas Bucket List – Round Rock Donuts in Round Rock 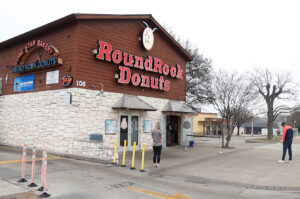 Round Rock – The morning rush in Round Rock can be a little ridiculous downtown. At the dawn of the day, people position themselves into the perfect place not to get on Interstate 35 but to get in line for Round Rock donuts. “It’s been here as long as I can remember,” said customer Phillip Hartfield. “It’s a very special thing and people like that,” said general manager Polo Garcia.

Polo Garcia has been at Round Donuts since 1996 and his eyes have never glazed over for these pleasurable pastries.  “I started in the back, pretty early, running doughnuts, making chocolate, and learning the process,” said Polo.

Polo has pulled his way all the way up to General Manager at this donut shop that dates all the way back to 1926. “Same ingredients. We haven’t changed anything at all, since 1926,” stated Polo. 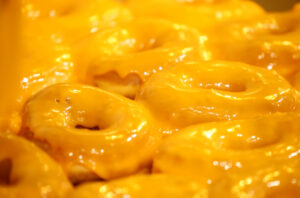 Now they do have darn big donuts. But before I get to that preposterously sized pastry, we’ve got to dive into what makes this donut shop different from the rest because it is busy morning, noon, and night. “We start around midnight. We’re going to stop probably 10:00 PM tonight. And it’s going until now,” explained Polo. 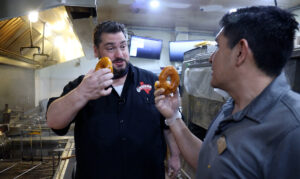 We get a little tour of the kitchen where the delightful donuts are made, unfortunately we do not get to catch a glimpse of the ingredients that are compiled into these pastries, that is top secret. Once the donuts take their shape, it’s off to the fryer where Polo looks for the perfect pigment on the donuts, then comes the glaze. “And this is the Round Rock Donuts, the best doughnuts in the United States,” said Polo while holding a freshly made donut. “It’s almost more kind of like funnel cake, but it’s got just this amazing glaze kind of all around it. Not too sugary, not too sweet. Kind of savory. It’s almost hard to describe unless you’ve just had it,” said Phillip.

“In Texas, we pride ourselves on all the diamonds in the rough, hidden places that you don’t know about, that are awesome. And this is one of those places,” said customer Ian Overton. 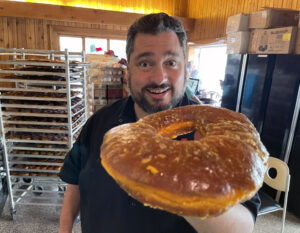 I got a bit of a surprise from Polo, a doughnut that’s definitely Texas sized! Despite taking a darn big bite, I didn’t make a dent in that donut.

“Anytime we come into the Austin area, Georgetown Round Rock, we have to have Round Rock Donuts,” said customer Kesha Rodgers.

“Business only stays open that long when it’s got a lot of history and just a phenomenal product. And it’s unlike anything else I’ve ever had,” said Phillip.