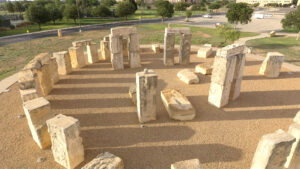 Odessa – In the heart of the Permian Basin, you’ll find all sorts of unique geographical oddities.  The sands of Monahans, the Wink Sink and the second largest meteor crater in the U.S. are a few of these places we’ve perused.  But over in Odessa, there’s a rock formation that’s not as natural as the rest.

“A lot of people have not heard of Odessa, and it’s kind of put us on the map,” said one who helped erect the replica, Dick Gillham. Gillham may be in his 90’s but the art installation he helped erect is dedicated to something much older than him. Stonehenge. “Well, because that’s what we had,” stated Dick. 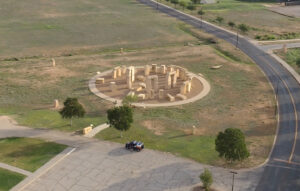 “They ask the same question, ‘Why?’, and then sometimes my answer is just, ‘Well, why not?’,” said Professor Christopher Stanley.Stanley is a Professor of Art at the University of Texas Permian Basin and he’s worked with Dick on all sorts of art projects around the Permian Basin.  But nothing is as immense as the tribute to Stonehenge that you’ll find on the UTPB Campus. “This was one of our first big adventures,” said Christopher. “Odessa doesn’t have a whole lot of attractions, and art is one way that I think he can bring it to the public,” said Dick.

It all started in the early 2000’s when Dick’s colleague, who happened to have a quarry, bequeathed boulders for a bold project.  The only momentous task at hand was to figure out what to do with the endowed endowment.     “Anything we could do to attract people to come and look at UTPB, that’s what we wanted to do,” said Dick. 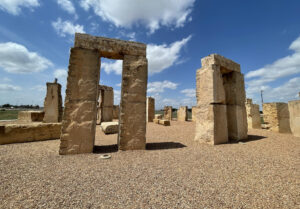 So in 2004, the rocks were raised. “I was in the crane business, and it fascinates me that back 2,000 years ago, they put these stones up on top of these other stones, and just moved the stones. Sometimes, we have a hard time moving some of this stuff, and to think they did it 2,000 years ago is phenomenal,” explained Dick.

“We both have this incredible history of working with our hands. The act of making the original Stonehenge all was done by hand, so we kind of took an easy way out, because we had something called “modern technology,” explained Christopher. 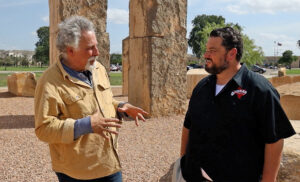 While these limestone pillars are quite large, they’re not quite as big as the boulders at Stonehenge.  But they are aligned exactly the same allowing that astronomical experience during the solstice that you’d normally only get in Great Britain. “Not everybody can afford to go to England and see it, so we give them the next best thing,” stated Dick.

Christopher then explained all of the things about the stone, from a geological point they could tell what animals lived on the stone, the conditions at the time, and even more! 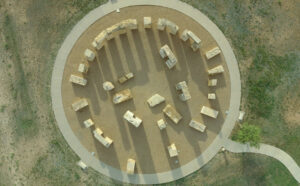 This is all thanks to a retired professional and a professor bringing together an idea that has captured the imagination of college students and normal sightseers all curious about the cosmos. “Makes a good place for people to theorize what they think this was built for,” expressed Dick. “There were a lot of questions about why it was built, how it was built, and maybe it’s not important why and how. What’s important is to bring students out here and have them think about it. Then you hone those critical thinking skills that maybe they didn’t learn earlier, and it’s like, ‘Well, come up with your own idea why they did it.’ And there might not be one right answer,” said Christopher.