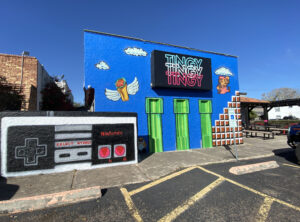 McAllen – If you love the 90’s, then you’ll want to take a trip to this taco shop called Tingy ‘cause it is totally tubular. “I mean, I’m a nineties baby and we like all the nineties stuff,” stated owner Karla Moreno.

Karla and her husband Antonio are the cool kids behind this concept. A colorful restaurant covered with 90’s references in McAllen. But the real star of their show is their birria tacos. “It’s gluttonous food. It’s big, it’s bold, but I love it. It’s good stuff,” said customer Duke Backus. “It’s a flavor you would not expect and it’s going to blow your mind,” stated Karla.

Now all this got started when Karla started selling tamales out of the trunk of her car. To kick things up a notch, they rented a small space. “We saw this little kiosk that was for rent. We decided that it was a good idea to open there,” said Karla. 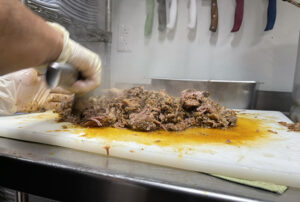 But then one fateful night, Karla decided to make something different for dinner and Antonio was impressed. “I had made some Birria for the house and my husband was like, ‘Well, why don’t we try to sell it?’,” said Karla.

It didn’t take long for their birria to blow up. What’s truly crazy is Karla and Antonio opened up two locations during the middle of the pandemic. Not only did they survive. They thrived! In two years they’ve already opened two other locations including one in Austin.

Now I’m sure at this point you’ve got two questions.  What’s birria exactly and what the heck is a tingy? “The Tingy came from my four year old. So, instead of saying the milk, he would say the ‘Milky’ So, instead of saying the thing, he would say that tingy. So, that’s where we got the Tingy from,” explained Karla. “We made it a challenge to ourselves to say, can we get people to say the word Tingy,” joked Karla’s husband Antonio. 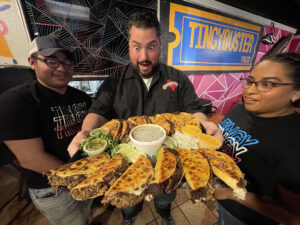 Antonio took us to the back to make some tacos. “So, during the day we cook it [birria] around, it takes about four to six hours for it to cook,” stated Antonio.

The Shoulder clod is boiled in a unique blend of mixed spices and seasons. “There’s little secret spices that are in there that we didn’t discuss and we don’t discuss, because that’s what makes it unique,” said Antonio.

Once cooked, the beef gets torn up before I even have a chance to tear it up. Tortillas hit the grill to get heated up. “These corn tortillas we actually get them made in Mexico. We have a distributor that uses our recipe. So, the size is a little bit bigger than your traditional tortilla,” explained Antonio.

Then a thick layer of mozzarella cheese is placed on top. So why mozzarella on tacos?  “So it actually gives it a good flavor, and when it comes to dipping the taco, when you dip it, what ends up happening is that you get that cheesy gooey. So, if you’re a fan of mozzarella sticks, it kind of gives you that same effect,” explained Antonio. 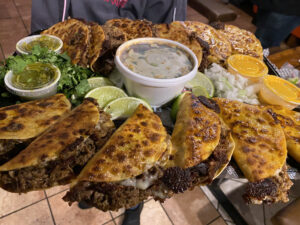 The bountiful amount of birria is bestowed on the taco. And juices from the pot are added for flavor.  As if you need more flavor! The tacos get plated with a few sauces including a mixture of cilantro, onions, and more juices from the birria beef pot. Time for tacos!

The Birria tacos are just steaming hot, fresh off that grill and the flavor is delicious. That meat stewed in those spices is so sensational with so many flavors are just exploding inside of that taco. he beef is so stewy and delicious, and just melts a part in your mouth, while cheese kind of holds things together, along with that crunchy, crispy but soft taco.

“I have never had Birria tacos before, but I always see people dipping it in the soup and I was like, ‘what is that?’ And, so being able to try it, I had three and I kind of want to take some back, get a to-go box,” said customer Loren Nelson. 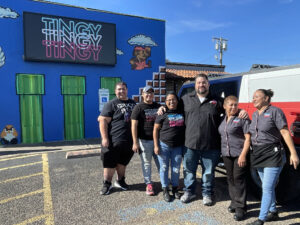 “There’s just a special flavor. I don’t know what they put in it or what it is, what it contains. All I know is that it’s really, really good when I dip whatever I’m eating in there,” said customer Daniel Varela.

“I don’t eat meat anymore or dairy. I just ate three tacos. I’m vegan, but I was like, I have to try this. It looks so good,” said Loren.

“What they’ve put together, it’s authentic, but they put all the right stuff in it that makes it hearty and good, and super flavorful, super tasty and stuff like that,” said Duke.

Well, if you’re looking for a not so typical taco, coming to Tingy and getting a Birria taco is a terrific stop on The Texas Bucket List!

“To be able to have people love what you do, and to be able to do it in the times that are not easy for a lot of people, has really been a huge, huge blessing and it’s unreal,” expressed Antonio.