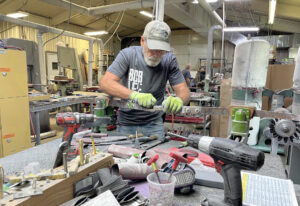 Jacksonville – In a small shop on the outskirts of Jacksonville, Rob Lee is on the mark. He miraculously sands and sculpts, making a product that’s been associated with his family’s name since 1951, Bob Lee Bows. “Obviously, building them every day, at the end of the day, you’re ready to get away from it, but as far as shooting one and hunting, never got tired of it,” stated Rob.

Rob and his son JJ work throughout the year to fulfill orders for the one month that is bow season in the Lone Star State. “He handles his part of it, I handle my part of it, the other guys that are working here, they do their part out of it. And then at the end of the day, we finish a bow or two,” said Rob.

These handmade three-piece bows are targeted by hunters and archers across the globe and it all got started with Rob’s father Bob Lee. “He had a love of shooting a bow. When he was a kid growing up in Austin, he made his own bows with cane and anything he could come up with,” said Rob. 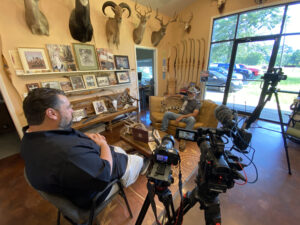 Rob idolized his Dad, followed in his footsteps, and paid attention to every detail of his demeanor. “Not only was he my dad, he was a business partner and a friend, and I learned a lot from that man,” stated Rob.

Nowadays it’s JJ who gets to see firsthand the intense integrity that Rob brings to the business.“He’s the hardest working dude anybody will ever know. I mean, he would be here 20 hours a day if we let him,” said JJ, Rob’s son.

It seems Rob’s pursuit of perfection has no bounds. “It doesn’t matter what it is, fishing, building bows, he can be digging a hole and he wants to do it better than you, it’s just how it is,” said JJ. 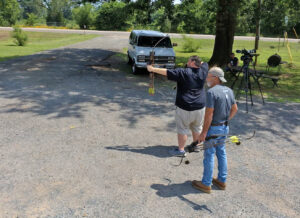 “You have to keep your mind on what you’re doing. Obviously, every piece has to be done right or at the end of the day, you have junk instead of a good shooting bow,” expressed Rob. Most hunters use rifles, so why archery? “The challenge. Honestly, when you’re hunting with a rifle, the hunt’s over with so quick, and at a long distance in most cases. With a bow, especially the type of bow we hunt with, your hunt’s just starting,” explained Rob. “It’s one of the oldest weapons in the world. It’s a very personalized thing, where just like a fishing rod, when you hook into that fish, you feel him on the other end of the line. It’s no different when you draw your bow back, you feel all of that and it’s all on you,” explained JJ. “It’s something when you take an animal like that with a stick and a string,” stated Rob.

Rob took me outside to show me the mark of a master. “He tells you he’s not that good, but he’s really good. Really good,” joked JJ. 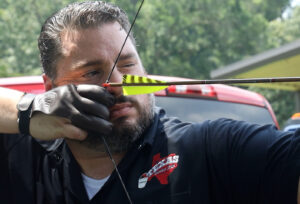 We practiced shooting the bow and arrow and while I didn’t quite get the bullseye, I made it pretty darn close! “Shooting a bow to me, if you’ve never shot one, is like saying you’ve never gone fishing. It’s a primal activity,” said JJ. “There’s some little thing inside all of us that goes back farther than we can remember and archery is a big part of that,” said JJ.

So if archery is something you are aching to do or getting back to the basics of hunting big bucks is high on your list, shooting a bow from Bob Lee’s Bows in Jacksonville is a bullseye on The Texas Bucket List. “It’s a lot of pride, there’s a lot of hours that go into it,” said Rob.

“That’s the only thing that worries me is, being able to keep up with what he’s turning out because I know someday I’m going to have to do that and I don’t know if I can handle it,” expressed JJ.

“Well, it makes me proud that I’m in a position where I can do that. I think about it a lot, and my dad’s shoes are big shoes to fill,” said Rob.