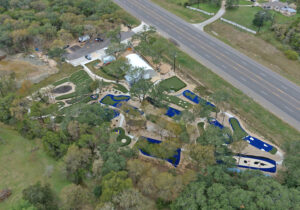 Buda – The sound of a golf ball hitting a putter is always pleasing to the ear but when the ball finds the bottom of the hole, that’s even better. For people who play putt putt, that’s pretty much the only task at hand.  But over at Memorial Mini Golf in Buda, there’s much more to the golf game here.

Brian McKinney is the owner of this big putting playscape that looks a little different from your typical mini golf getaway. “My favorite hole is probably the Submarine Atlantic Blockade hole,” said Brian.

So, Brian created this one of a kind excursion complete with a museum and the only full scale replica fighter plane playscape in the world. “History buffs, mini-golf lovers, I mean, you could almost spend a half day here in itself,” said Brian. 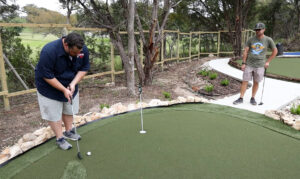 Brian’s inspiration to create this colorful place to place a round actually came to him in a dream. “I had a pretty vivid dream that my wife and I and kids were playing on a World War II themed miniature golf course. It was a little bit different how this turned out, but, but I woke up and said… It was a calling to try to figure something out, to create an interactive environment, to not forget this generation and mini-golf was it,” explained Brian.

Each hole is dedicated to particular parts of the war and the people who fought it. “Hole number one starts in Blitzkrieg, which is the start of the technical start of World War II. And then it just runs down the chronological order,” explained Brian. 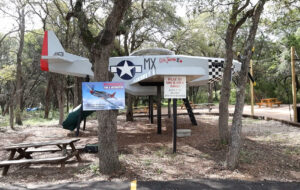 Another hole is dedicated to Pearl Harbor. “Bomb hits are actually where the bombs hit on the real USS Arizona that sank it. And then here we have a replica, full scale replica, 40-millimeter anti-aircraft cannons that were made by the same model builder that built the planes in the museum. And then the hole is dedicated to a veteran who trained with the Navy on Pearl Harbor,” explained Brian.

Then there’s the hole dedicated to Normandy and it’s a beast! “So it’s the longest par five. There’s actually a place in the Northeast that has the world’s longest hole, but it’s a par 12,” said Brian.

While this is fun, it’s actually quite a lesson in what happened during the war and those who contributed throughout. “Getting these younger generations to learn what these guys did outside of what just their Texas history book teaches. But more of the details that we have with the veterans dedicated to the holes and the additional history that we added to the placecards,” said Brian. 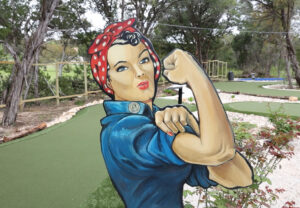 One of those veterans featured is Abilenian Huie Lamb. The playscape is a replica of his plane and inside the museum at Memorial Mini-Golf you’ll find a display dedicated to him along with a collection of his things. You’ll also find the uniform of Dorothy Lucas, who served with the Women Airforce Service Pilots. “This one gets overlooked, I think a lot, in history where all the able body guys that could fight went overseas and who, who was, who was making and helping with the war production in the United States. And they stepped up big,” explained Brian. 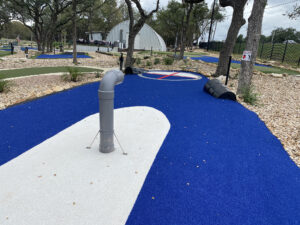 Saluting the greatest generation that ever lived is always easy but to do it while play golf and learning about the toughest war of all time is an easy stop, for the most part on The Texas Bucket List. “It’s not huge, like the Nimitz Museum or Smithsonian, but you’re getting a huge chunk of history at every hole,” stated Brian.