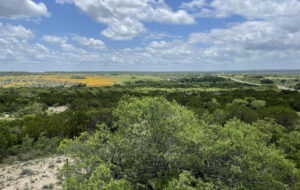 Brady – Towns in Texas are known for their way of life. Close knit communities where neighbors care for one another.  You see, Texans have a lot of heart and things aren’t any different in Brady. “Brady is a great little town that is very, very friendly,” said Brady mayor Tony Groves.

Groves has been mayor of Brady since 2013 and his biggest lesson after 8 years in public office. “If people like you, you can make lots of mistakes,” joked Tony.

Tony is a native son of this little town but is by no means a career politician. He served in the Air Force for 30 years flying F16’s. “I loved it. Yeah. I would have stayed 40 years or longer if they’d have let me, but 30 years is when I timed out,” said Tony. 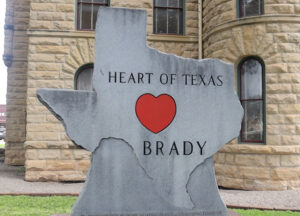 Tony oversees this small community that happens to have a big heart and a whole lot of other amenities. “We own an airport. We own a lake, a golf course, swimming pool, all kinds of things,” said Tony. 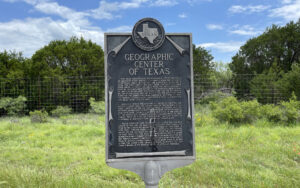 Now Brady isn’t exactly smack dap in the middle of our state but it’s the town closest to the mark.  You see the actual location is a few miles up US-377. There you can climb a watch tower and see nothing but Texas in all its glory surrounding you!  While you gaze over our great state, you can’t help but feel like you’ve made it to the center of the universe and for me it did fill my soul. “Nothing exciting to see off there except a lot of mesquite and a reasonable amount of prickly pear,” joked Tony. I think Mayor Tony would rather be in Brady.

“It’s kind of bragging rights. There’s a song “Deep in The Heart of Texas” and a lot of people in Brady take that seriously,” said Grant Evridge, a Brady local. 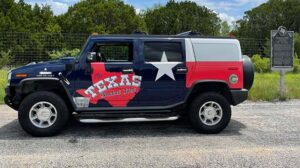 Being the official heart of Texas is a title Brady takes pretty seriously but the only time Mayor Tony will be politically correct, it’s about talking about the size of the ticker of Texas. “It’s not very friendly to argue with folks about, ‘Who’s the real heart of Texas?’ The heart of Texas is big,” expressed Tony. Other folks, not so much. “There are other communities in the state that are not near the center that claim they’re the center, but they’re not, we are. We’re the geographical center of Texas and proud of it,” said Grant.

Fortunately, we can all be winners with a trip to the center of our state, to see the geographical center of Texas and sync our hearts as one right here in the Lone Star State. “We just welcome everyone with open arms, and I think that’s not everywhere you go. So, we want that to be a really memorable experience,” said DeAnn. “It’s a good place to stop and catch your breath as you move on, and in, whichever direction you go: north, south, east or west,” stated Tony.