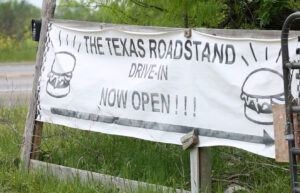 Cedar Creek – If you’ve even traveled between San Marcos and Bastrop, you know how crazy Highway 21 can be. Sometimes you just want to pull off the highway to take a break from the ever-growing amount of traffic on this two-lane road.

The Texas Roadstand is the perfect place to do just that, just be sure you don’t accidently pass up this little place on this precarious road. “I actually passed it on the way and I’ve been here before,” joked customer Rebecca Birdwell. 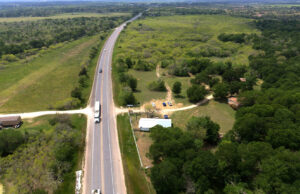 After getting a culinary degree and Walnut Hill College, she worked in restaurants from France to Philly but wanted her own place. So in 2016, she found 7 acres with a small building on the side of the road in Cedar Creek and opened The Texas Roadstand. “It was an old vegetable stand. Just sitting on the side of the road and everybody knew it as the vegetable building because it said “Vegetables” on the front. And when we painted it over, people were mad. They were like, ‘Why would you do that? It’s a landmark?’ I’m like, ‘It’s something new now,” explained Marian. 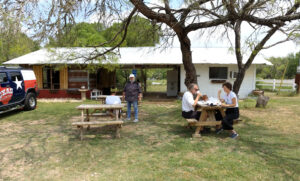 Being from New Jersey, Marian wasn’t ready for the reception she received when she turned on the grill and started making food for the traveling masses. “People were very, very excited about helping. They were just like ‘What can we do to make you succeed?’ I was like, that restored my faith in humanity. I was like, ‘Wow. You know, they really are. They really want to help people out here. They really want to see you succeed. That whole independence thing is like awesome,” expressed Marian.

In order to continue that success Marian had to have good food and we don’t just show up for anything. First and foremost are her famed pickles. “People really like pickles out here. I learned that,” stated Marian. “She makes her own pickles too. The pickles are really good,” said customer David Rice. “I added this kind of as an afterthought. And this was the best afterthought I ever came up with,” joked Marian. 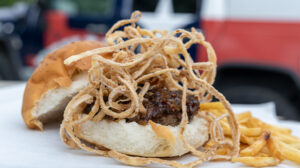 Cut up cucumbers, dill, rosemary, proprietary pickle seasoning and jalapenos are added to her brine mixture and allowed to ferment over a week. “I grew up eating east coast pickles, kosher dills. And it is based on an east coast kosher dill pickle. It’s just something different,” explained Marian. While these cured cucumbers tickled my pickle, I was here for something a little more hearty, her hamburgers.

“Make sure you get me the one with the crunchy onions,” said Rebecca. Known as the Podcast Burger, this crunchy creation might have a new name once we’re done featuring it.

As the fatty meat and cheese cooks, Marian gets the onion strings fried up and the bacon jam heated up to perfection! “I have a vegan that comes once a year. And this is the only burger that she’ll eat,” said Marian. 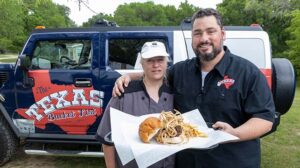 Marian takes her house made rolls and creates this monstrously sized burger with a massive amount of onions on it. The Podcast Burger, which is like a bacon jam burger, just on steroids and with one bite you can definitely tell that burger is a ride through texture town. “Instead of mustard and ketchup and stuff, it just is a whole different taste,” said David. “It’s just so juicy. And I mean, it’s a good hamburger,” said Rebecca.

Well, if you’re looking for a really good burger that happens to be on the side of the road, come into the Texas Roadstand in Cedar Creek. It’s well worth a stop on the Texas Bucket List! “This has been an absolutely life-changing experience for me, getting to know the people and my customers and how beautiful and how pure souls these people are. I’ve never experienced that before. I’ve never had people who want to see me succeed just to see me succeed,” expressed Marian.