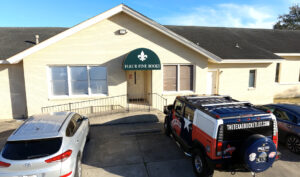 Port Neches – The Golden Triangle is always money when it comes to finding a fine place to eat. And with a bayou being around every corner, the sites in this corner of our state are stunning. But if you’re ever near Beaumont and you need a book, there’s a secluded spot on the side of a building in Port Neches that should pique your interest. Just don’t judge the place by its cover because Fleur Fine Books is a fine find. “We’re the best kept secret in the golden triangle because we’re so hard to find,” stated Rick Beaulieu. 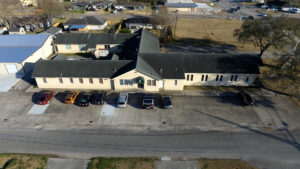 Rick is the coauthor of this little book star that was started by his good friend Dale LaFleur. “He had a collection of about 3000 books at home that were in his spare bedroom. Then his wife got pregnant and told him she was turning that room into a nursery, that he had to get rid of all of his books. So, to spite her, he went out and bought a used bookstore that belonged to another lady, it was closing down, and bought 14,000 more books,” explained Rick.

That was over 20 years ago. Back then Amazon and Fleur Fine Books had a lot in common. “We got him in with online selling very early. At that time, Amazon didn’t have ‘Amazon Marketplace’. Amazon had a want list. You went to Amazon looking for a used book and you put in a want and asked them to find it. He would sell Amazon a thousand books a week.,” explained Rick. 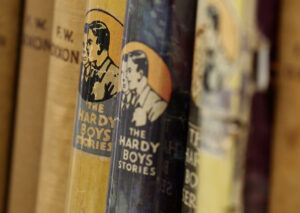 Everyone buys everything on the internet anymore. How is a bookstore able to survive in these times? “It’s difficult,” expressed Rick. Especially when folks have a hard time finding your store!  “I’ve had a gentleman. We had an eight-foot placard sign out in the front of the store. Said, “Books,” in red letters two feet tall, and then had a big red arrow that pointed to the building, then smaller letters said, “Entrance on 7th Street.” Phone number on it. He sat in the parking lot across the street and called the phone number on the sign to find us,” said Rick.

In fact, Fleur Fine Books sells a large volume of volumes. And we’re not taking just your typical Tom Clancy’s or people with a hankering for the Hardy Boys, we’re talking about some very specific and unique books that people are perusing the planet for. “I brought in just over 2200 books today. We’re constantly buying books,” stated Rick. “You name it, we’ve got a book on the subject somewhere. We sold a $2,300 book on Russian mushrooms. Oddities sell,” said Rick. 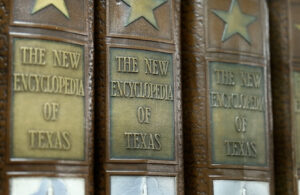 Rick then showed us the Texas History section and it was unbelievable! “It’s got Texas history and Texas-particular books in it. We have the New Encyclopedia of Texas from the 50s. We have a couple two-volume sets up here. “These are ancient, leather-bound, padded, and they’re beautiful books,” said Rick. 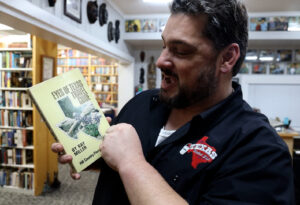 Turns out it’s not just the books that are signed. When authors visit the store, they get to take part in an unusual tradition at this boutique bookstore. “We do multiple book signings here. The authors all sit at this table and sign their books. We get them to sign pictures while they’re here. very author who’s been here to do a book signing has also signed our table. That’s one of our well-kept secrets. They don’t usually know it’s going to happen until we turn the table over after the signing event,” explained Rick. “We’ve had everyone in here doing book signings with us from New York Times best sellers to the preacher’s wife down the road,” stated Rick.

Despite the fact stores dedicated to published works are getting harder and harder to find, Fleur Fine Books continues to blossom. Providing those who enjoy the written word a place to put on The Texas Bucket List.

“We’re very proud of the store and try our best to make it a higher quality store,” said Rick.