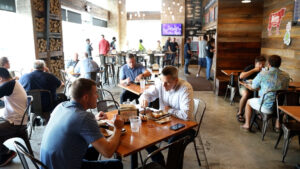 Houston – On the Northwest side of H-town, you’ll get a whiff of Gatlin’s coming out of the Oak Forest neighborhood. That smell of smokey, seasoned to perfection BBQ is so good that even all the gold in California couldn’t keep you away. “Out of body experience, that’s the best way I can put it,” said customer Anthony Lafleur.

“We do enough stuff to keep you on your toes,” said owner Greg Gatlin. Gatlin got things started at his namesake restaurant in 2010 and in case you’re wondering, he’s not related to the infamous singing Gatlin Brothers.

He is related to his parents Henry and Mary though. They’re on hand every day and when you arrive, you immediately feel like family. “When it started, it was me, my dad, my mom. Dad and I used to come on separate shifts in the middle of the night. He would come in the middle of the night, then I would get here probably… Over there probably about 4:30. And then he would come in right about 5:30, right after he took his nap, and then we were doing that every single day. Right now, I think it’s crazy, but then it was just the norm,” explained Greg. 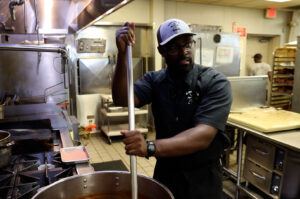 Greg wasn’t always a BBQ man, he majored in economics and management and leading up to opening his Gatlin’s he was in commercial real estate. “We were going out and we were eating, you’re entertaining people, you’re traveling and whatnot, and I’m like, ‘I can cook better than some of the stuff that I’m eating.’,” said Greg. That’s when Greg got to work on Gatlin’s. “We used to barbecue all the time, it was just this thing. So my dad, my uncle, my great uncles and stuff. All the family reunions, church functions, they would all barbecue. So it was one thing we kind of knew how to do already. It was just, ‘Hey, how do you put your stamp on what you do?’,” said Greg.

So Greg crafted his BBQ to combine flavors from all over the region and was one of the first craft BBQ companies in the state. “The more things change, the more they stay the same, so the principles and the basics are always the same, but you know, you’re always looking to put your spin on or trying to see kind of what’s different out there. Is there a different taste? Is there a different way for us to do this,” said Greg. 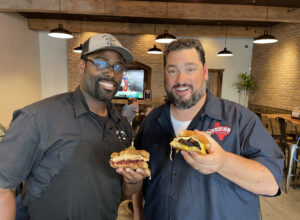 Here you’ll find eight smoked meats and over a dozen sides to choose from. “There’s 14 different sides,” stated Greg. “I’m from Louisiana, so when I can see collard greens, barbecue, and Dirty Rice all on the same menu, it’s got to be a good place,” stated customer Mike Benjamin. “It’s a unique taste, I really can’t explain it, but it’s just a very unique taste, man, and it’s something that I love from the beginning,” said Anthony.

Surprisingly Greg wanted to feature a sandwich, actually two of them. So who am I to turn him down?  We start with breakfast. “The Brisket Biscuit is a staple, which is going to be your Cathead biscuit right there. You got your smoked brisket, grilled onions and jalapenos, and on top that with some cheese, it’ll be…It’s good stuff,” said Greg.

Executive Chef Michelle Wallace got the big ol’ biscuit toasted on the flattop while pickled jalapenos and onions also got grilled. Throw in an egg and some brisket and we’re cooking. Greg stirs up things up with a condiment that compliments the sandwich completely, bacon jam. Throw on cheese and slap it together and you’ve got The Brisket Biscuit. 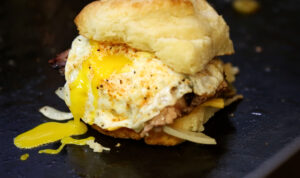 We’re not done yet, Greg also got things started on a smoked pastrami sandwich. “We brine and smoke our own pastrami. It’s about a nine-day process depending on the size of the brisket. Yeah, all the spices we toast off, get them in the brine, set them in the walk-in for about a good nine days,” explained Greg.

The thinly sliced beef gets warmed up with marble rye bread and a creole mustard made in house mixed in with sauerkraut is spread on. Swiss cheese is melted on top while a slice of BBQ turkey is added for good measure.

It’s time to sit down with some sizable sandwiches, and you got to start with breakfast. Time to gracefully go in for a bite.  It’s safe to say breakfast sandwiches are not supposed to be this good. Every single thing that’s in this sandwich, it smacks you in the face. You don’t even taste jalapenos, that brisket is so good, it just goes with everything. 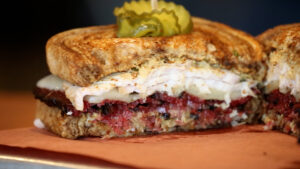 As for the pastrami, it too is a certified hit. The brisket and turkey has amazing flavor, but that Creole mustard with the sauerkraut in it, wow! “There’s a number of barbecue places throughout the city, but in my opinion, this is THE barbecue spot,” said Anthony.

To say the brisket is tender would be an understatement. “The only downside is having to go back to work afterwards,” joked customer Matt Duca.

Next time we’re heading to Houston, I’ll definitely be singing one day closer to you because coming to Gatlin’s for the Brisket Biscuit and the pastrami sandwich, now that’s well worth the stop on The Texas Bucket List.