The Texas Bucket List – The Orange Show in Houston 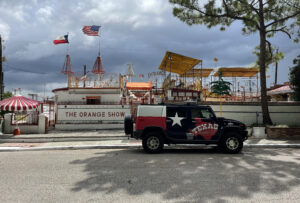 Houston – The hustle and bustle of the city streets in Houston can always be a bit bananas but there’s no reason to gripe about sour grapes.  Just take a little detour on the side of Interstate 45 for a fruity lesson about the Orange and the one and only Orange Show.

“Thank God, Jeff bought this property right by the freeway. He really did us a favor,” said Pete Gershon. Gershon is the Curator of Programs for the Orange Show Center for Visionary Art. “What we do at the Orange Show is to celebrate the artist in everyone,” stated Pete.

The Orange Show Center for Visionary Art celebrates the Space City’s unique art scene with places like the Beer Can House and its name sake, The Orange Show.  “The Orange Show means so much to us. It’s a symbol,” said Pete. 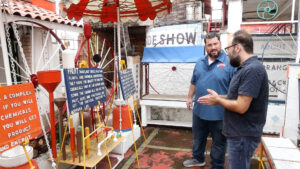 This odd and interesting homage to the orange was built by one man who had a fondness for one particular fruit.  “So the Orange Show was built between 1955 and 1979 by a retired postal worker named Jefferson Davis McKissick. He moved into this neighborhood when it was pretty new, and bought this as vacant property,” explained Pete while walking us through the installation. “This is a place where information is communicated. Jeff really wanted you to know about the nutritional value of the orange. So he’s made some signs here that explain where the nutrients come from. So it’s kind of like an art exhibit and lesson in health, according to Jeff,” explained Pete. “He felt like the orange was the perfect food. He wrote a whole book about this. It was called, “How You Can Live to be a 100 Years old and Still Be Spry.” And he wrote this in 1960 and it was like the 1960 version of a blog. It was stapled together, mimeograph pages, information that he had gleaned from his visits to the public library. And he thought if you really took care of your body and you ate the right things and you exercised right you could live to be a 100 years old. Jeff only lived to be 78. But his message survives,” said Pete. 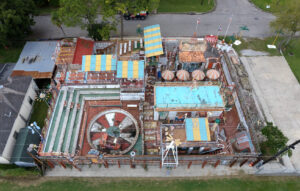 While Jeff’s allegiance to oranges is the message, the architecture, art, and design of his palace to produce is what makes this place really stick out. “As his ideas evolved, the space began to ramble on and on and expand and grow,” said Pete. “Engaging with art does not necessarily mean an afternoon in a quiet museum, where you’re very seriously walking through and studying the artwork,” stated Pete.

While this art installation is a part of the community now, when Jeff built it the reception was a little sour. “There was some resentment and some confusion, I think, with the neighbors. But Jeff was not really a chook. This is somebody who graduated from college, went off to grad school. He worked in a bank. He had a good head on his shoulders,” explained Pete. 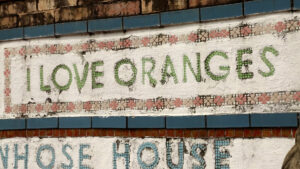 From upbeat signs, sizable steamboat models, to things that just don’t make a lot of sense, there’s all sorts of stuff to see here but for Jeff, a tiny ledge filled with a funky assortment of tiles is what squeezes the artist juices from his soul. “Yeah. It’s a weird little part that nobody ever notices, but it’s a hodgepodge tile that… Obviously Jeff never wanted to throw anything away. He wanted to decorate every surface. It’s just something I noticed and always wondered, why did he do it like that? Why did he use this strange assortment of hearts and fish and geometric tiles? It’s really one of the most abstract pieces of the Orange Show. It’s a minor detail, but it’s always caught my eye.” And what’s unique is, it’s hidden back here in the back in the corner against the stairs,” explained Pete while showing us the ledge.

So if you want to be a star in the Orange Show, just stop by The Orange Show, and see why peeling away the layers of the art exhibit is well worth a stop on The Texas Bucket List. “You can think differently. You can think differently about art and creativity. Everybody’s an artist deep down, and you can work with what’s close at hand and make something special and unique. And we can inspire people to do that with this place,” expressed Pete.