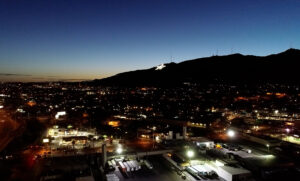 El Paso – Out in the west Texas town of El Paso, we’ve met all sorts of characters and one of the most memorable has been Gary Montelone. His Italian restaurant Montelone’s was our first stop on The Texas Bucket List back in 2019.  While the food was fantastic, it was the phantasms that put this place on the map thanks to eerie feelings, unreal changes in room temperatures, and the occasional unexplainable twisting and bouncing beer cap. So of course, we had to come back for more! But this time, Gary has a new venture, an outdoor drive-in inspired movie theater.

Gary used to work in Hollywood as set designer and now he’s bringing the old school stars of Tinseltown to the sun city at the Blue Moon Drive- In. “I’ve always liked drive-in theaters. And then with my background in Hollywood and stuff, I just really wanted to make it,” said Gary.

“To see something like this coming back into El Paso was awesome,” said customer Michael Hallberg. “I don’t know. Driving down the freeway you imagine to find a drive-in theater, but I think it’s fun,” said customer Lorena Ramos. 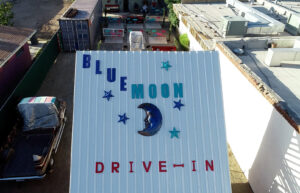 Instead of the Hollywood sign, you get to watch under the bright lights of the El Paso star. “The evenings here in El Paso are beautiful,” stated Gary. And the nostalgic feel thrives with old school movies. “We show all the old Bela Lugosi, the Dracula’s, all the old sci-fi. Tonight we’re going to show The Alligator People. It’s a classic,” said Gary.

Now technically you can’t drive your car into the small theater lot, but you can get the feeling of being at a drive-in thanks to its outdoor setting, speakers, and snack food. “It’s got that kind of open-air feel. You’re not stuck in a building. And the speakers themselves, that in and of itself, really brings back the nostalgia,” said Michael. 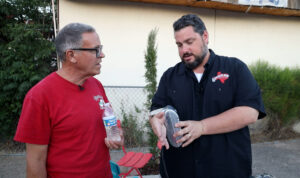 Going into the snack bar is an experience in itself thanks to Gary and his incredible artistic talents. Painted on the walls are some of your favorite classic movie characters, from E.T, to Gremlins.

Turns out Gary got artistic in the bathroom too! The bathroom has some life size statues of even more infamous movie characters, like Dracula, The Invisible Man, Frankenstein, and the Wolfman. “That was a little too life sized for me, but that’s pretty cool. Pretty cool bathroom. Best bathroom I’ve been in in a while. I’d say,” said Lorena.

So I just had to ask Gary, why El Paso? “Because we don’t have anything like it…I kind of follow them like Walt Disney. He was there to make people feel good and do good for the community and stuff, and that’s what I like to do,” expressed Gary. 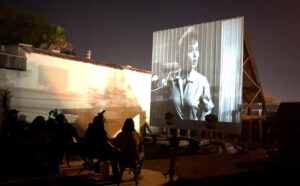 So if you want to experience one of Gary’s great stops but don’t like spirits, only the ghostly reflection off the silver screen, the Blue Moon Drive-in is a stop for you. “That’s exactly what we are all about in El Paso. We’re always trying to do something different that speaks of us here in El Paso,” stated Lorena.

“I’m a kid at heart. Really, I am. Yeah. I enjoy it. And I like to make people happy and have them enjoy it as well,” said Gary.

“You drive to Texas, see the Alamo. You drive to the Corpus, get hot and sweaty. Stop by through El Paso and see a movie,” said customer Joe Rodriguez.