Austin – When it comes to being a food cart that makes the cut in the Capital City, you’ve got to have something creative and that’s exactly the case at El Perrito.  Here they’re not serving up your typical Tex-Mex, it’s more of a west Texas way of doing things. “The first week I ate every day for five days,” said customer John Bomhardt.

“To be honest with you, it’s the most work I’ve ever done,” said owner Ivan Enriquez. Ivan may be dog tired, but his creations are keeping foodies from a particular part of our state extremely happy. Being from El Paso, his creations are homages to that city’s finest offerings. “It’s awesome. Well, I mean, for me at least because I get to bring like a little piece of home,” said Ivan.

“If you want a taste of El Paso, this is a good start,” claimed customer Roman Grijalva.

“I come, I try it. I cried. I cried. I had found home. That is a God honest truth,” expressed customer Cathy Lowenberg who also hails from El Paso. 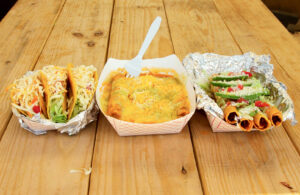 Yes, you’ll find tacos with a little twist on the menu but the signature specialty is their ELP Tacos. “ELP tacos, standing in for El Paso or El Perrito tacos, whichever you want to call it,” joked Ivan.

Very similar to Chico’s Tacos in El Paso, a place we featured a few years back on The Texas Bucket List, the ELP tacos tend to have the same cult following as their counterpart’s way out west. “It’s the same style, you’re drowning or already drowning in nice spicy broth, and it just hits home. It just hits like home,” stated Ivan.

If you’ve ever talked with anyone from El Paso, they’re truly unique Texans thanks to their incredible isolation in the far reaches of our state.  And trust me, there’s nothing that people from El Paso like to debate more than the food.

“Being from El Paso, we complain a lot. We like to say, ‘Oh yeah, our food’s the best.’ or we always want to complain about something like, ‘Oh, out here, they don’t have this. Oh, wow. This is missing.’ So it was one of those things I better stop talking and better put up, so I’m like just, ‘You know, I’m going to open up a food truck out here.’ And, yeah. That’s how I just started with that mindset, ‘I’m just going to do it myself. I’ll figure out a truck and just go from there.’,” explained Ivan. 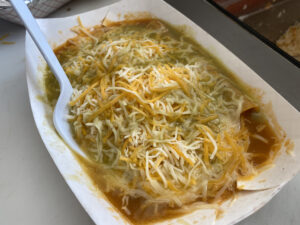 “Not only are people coming here and learning a new way to eat good tacos, but the family of El Pasoans, we have finally found our El Paso people. I’ll tell you,” said Cathy.

Ivan and I squeezed into his trailer to drown some tacos and the Tour of El Paso.

“We’re going to start first with our ELP tacos, which are El Paso tacos, our version of the other guys. So pretty much it’s just our drowned taquitos. People can get them in order of three or they can get them in an order of six,” explained Ivan while preparing the dish.

Ivan pops the taquitos in the fryer and adds in some bonus items. “We’re also going to do some shredded beef flautas. A lot of people don’t do them out here in Central Texas, so this is something I definitely wanted to bring over here. Pretty much what I use is brisket,” said Ivan.

After rolling them up and adding them to the fryer, tacos also got put on the menu. “Old school style crispy tacos, just like if you’re back home in West Texas, like your mom or your grandma was making for you at the house,” joked Ivan. 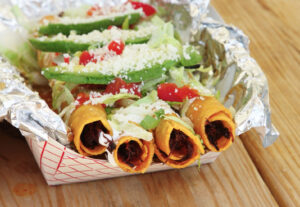 As those finish up on the flat top and fryer, the ELP Tacos start coming together. Ivan poured the delicious sauce, topped them with Mexican cheese and they were ready to go! And if you like the sauce enough, you may not even need a drink!

Well, when it comes to the tour of El Paso, I start things off with the crispy tacos.They seem to be the least messy of all the offerings, so I guess we’ll just go to town on this taco and it is truly a terrific taco.

From there, we find the flautas. These massive offerings filled with that shredded beef, it’s like the tastiest cigar you’ve ever had. The shredded brisket has a very unique flavor, almost a sweet tinge to it on top of that smokiness, with that incredible tortilla wrapped around there. Delicious and different!

And finally, the star of the show, the ELP tacos. You might have seen these once before on The Texas Bucket List. A little bit different here with the green salsa on top of it. And the first thing you notice is they’re not as soggy as some of the other ones I’ve tried before. They’re actually still crispy. After a few bites, I was back in El Paso but this time, much closer to home. I know it’s a big debate, but I love them. 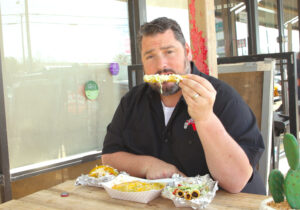 “I slept that night like my abuelita was patting my back. That’s how good these are. I’m telling you,” said Cathy.

“It does have a little bit more of a bite, but it has a richer flavor. This has been what I’ve been eating for forever,” explained John.

“It’s like they know me. They looked me up in the book and said, ‘I’m going to make a taco just for Chatty Cathy.’,” joked Cathy.

There’s only one test left for this famous El Paso dish, drinking that amazing sauce and it’s pretty darn good. Not as soupy and much thicker.

“You got to try at least once before you kick the bucket,” stated Roman.

“Everybody always gets close, but just never gets to the king, who I would like to call him back home,” said Ivan.

Well, if you’re looking for a taste of the West Texas town of El Paso and you happen to be stuck in the Central Texas town of Austin, you can find it here at El Perrito. Well worth the stop on The Texas Bucket List!

“You leave and you’re happy. And you go home and you’re like, ‘I’m going back tomorrow.’,” joked Cathy.