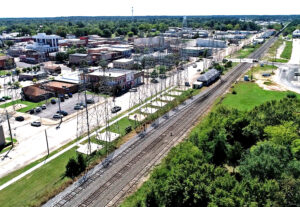 Kilgore – Texas is all about oil and it all strart with the state’s first really big boom at Spindletop back in 1901. Today you can find pumpjacks from Beaumont to Midland with roughnecks working throughout the day to collect crude.

Over in northeast Texas, the oil boom wasn’t heard till the 1930’s.  That’s when things got crazy in Kilgore.  “At the height in Kilgore, there were over 1,100 derricks. As you looked across the skyline, you could see them popping up all along,” explained Olivia Moore, manager of the East Texas Oil Museum.

Dedicated to the boom that kicked off on December 28, 1930 the East Texas Oil Museum takes a look at what life was like when oil changed the landscape of a little town. “Well, they say that a picture’s worth a thousand words. Well, could you imagine how many words walking into a picture would be,” Olivia stated as walking into the museum. 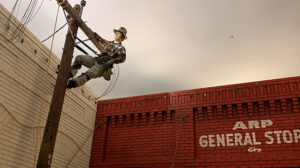 When walking into the museum, you are greeted with a man hanging from the ceiling that is sure to surprise you.  “We have Buddy,” explained Olivia. Buddy being an animatronic figure of course. “Buddy welcomes you in, talks about electricity coming to the East Texas oil field and then that brings you right into the general store, where we have Mr. Crim, the mayor of Kilgore talking to his customers about the goings on in the East Texas oil field,” explains Olivia. This town, that happens to be inside of the museum, consists of everything that you would have found in Kilgore during the oil boom. One of the most active sites for drilling in Kilgore happened to be right in the middle of town.  An area famously referred to as the world’s richest acre. “Out of that 1.2 acre space, they were able to pull 2.5 million barrels of oil out of that. And a barrel of oil is 42 gallons if that gives you any kind of reference of how much crude that is,” explained Olivia.

The historical pictures of the time help tell the story but actually having some derricks on that acre, well that helps too. “We’re an oilfield town and we’re very, very proud of our heritage,” stated Mayor of Kilgore Ronnie Spradlin. 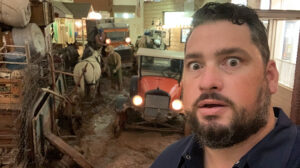 Ronnie Spradlin has been the Mayor of Kilgore since 2010 and he grew up here.  Back when he was a boy, he took a family trip to Big D and he had one big question. “Where are their derricks? I assumed every town had derricks in it. Ours did,” said Mayor Spradlin. These towering spires dedicated to a time gone by help bring the story of Kilgore’s oil boom back to life.

Each one of these derricks here now, represents pretty much where a derrick was. “There were even more on the block, but we put back the number of them to have a representation of what it looked like,” explained Mayor Spradlin. If there was a building, they would simply knock down the walls and drill straight through the floor, not even pull up the floor! “Yep, the old brick floor from the bank is the next derrick over, and they left the brick there and just drilled through it,” said Mayor Spradlin.

“The oil field itself affected so many people in East Texas. It helped insulate against the great depression. It helped win World War II with our oil getting to the refineries in the Northeast. It just is such a special story. And it needs to be told,” said Olivia. 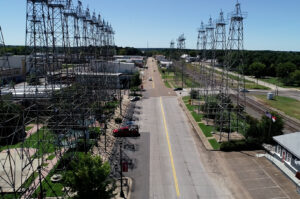 “The oil business has been like a ride on a roller coaster. There’ve been years where there was more money in town, second highest deposits in the state of Texas back in ’78, ’79. And then when the oil field would crash, people would be unemployed. Our unemployment would go to double digits and in spite of what the nation’s doing. So, we’re have our own little economy that’s totally separate from the rest of the nation,” explained Mayor Spradlin

So the oil continues to churn out of Kilgore, providing Texans with a natural resource for energy and our economy, including bringing people to town to get a look at the lineage of the Lone Star State. “Being transported back in time is something that all people would love to do before they kick the bucket,”joked Olivia.