Gatesville – There’s not much more synonymous with our state than the spur.  Heck we’ve even got a professional basketball team named after them. But over in Gatesville they’ve got so many spurs that I’m told a horse won’t step one hoof into town.  After our visit, I can see why!

Coryell County is home to a great deal of Fort Hood. Just north of the massive military base is Gatesville, a small town with a love for spurs. “It means everything to us. It really does,” said Ervin Adams, the President of the Board of Coryell County Museum.

Established in 1985, the Coryell County Museum tells the story of the county that’s been around since 1854. Here you’ll find the county’s original jail that Sam Bass was jailed in in 1878 for disturbing the peace. You’ll see some of the most detailed and decorated doll houses I’ve ever seen. And they happen to have the largest spur collection in the world. “Pretty much the whole museum is centered around the spur collection,” stated Ervin. 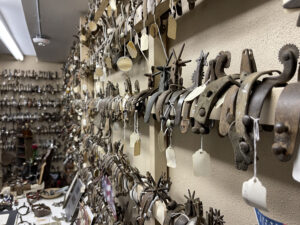 The Mitchell Spur Collection is massive and it’s put Gatesville on the map. Local coaching legend Lloyd Mitchell amassed this collection of over 10,000 spurs in his lifetime. “Coach Mitchell was a special man, he did a lot of things in his life and then just did this collecting on the side,” explained Ervin.

How did a small-town football coach get into that? “Well, I married the Mitchell’s youngest daughter,” stated Grayson Wetzel, the son-in-law of Lloyd Mitchell.

Grayson knows this collection well.  He married Charlotte Ann Tootie Mitchel and he first set his sights on the substantial spur collection when he met his future father-in-law in 1965. “They sent me outside with her daddy. Out in the back of their house there were two old wooden buildings. Both of those buildings were crammed full of spurs and other western memorabilia. I spent the afternoon out there in hog heaven,” explained Grayson. 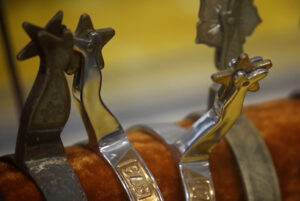 After that first meeting, Grayson knew he was saddling up for a long ride with the family. “As we were finishing up the visit that afternoon he said, ‘Young man, you’re welcome to come back anytime. Just bring a spur.’ So I made it my goal to do that from that time on,” said Grayson.

Grayson took us on a tour of this massive collection, and it sure does live up to its reputation! The museum has around 6,000 of the spurs in the museum. “It’s hard to display all of them,” stated Grayson.

The main exhibit consists of the most unique and storied spurs, even spurs owned by Jackie Kennedy. There’s even a colossal spur in this sizable spur collection. Then there’s spurs that showcase some unique artistry. “One of the display cases shows Gal-Leg spurs. And as I’ve done programs through the years, I say Gal-Leg spur just like that. I find that many people have no clue what I’m talking about. On the shank of the spur, the heel bands got decoration on it. Looks like a lady’s leg. So in history books or other books, you’ll find them called Gal-Leg, or sometimes they’ll say Lady-leg spurs,” explained Grayson.

So just what was it that made a football coach from a small-town start collecting this particular piece of ranching equipment? “As a young man, he was headed out west, headed towards Yellowstone to work, but he was working on a ranch that’s on the way in New Mexico. Says he was riding through the pasture one day and he looked down and saw something shiny. Says he got off his horse, kicked the dirt around, and sure enough there was a spur. He said, ‘I picked it up and I’ve kept it.’ And then said, ‘I’ve been looking for the mate to it ever since.’,” explained Grayson. 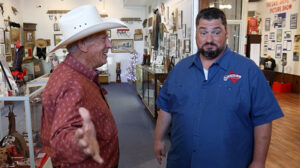 Surprisingly the spur collection has spurned interest in a tool that some folks don’t even know what it’s for anymore. “Everybody knew about spurs back then, past my generation I’m not sure how many know about spurs,” stated Grayson.

So if keeping the western heritage and history of Texas is something close to your heart or you’re just looking for a spur of the moment trip, a stop at the Coryell County Museum to see the Mitchell Spur Collection is a surprising stop on The Texas Bucket List.  “If you’re a true Texan, you’ve got to have a little bit of interest in ranching, cowboys, horses, it can just go on and on. You got to have a spur involved somewhere in it,” stated Grayson.