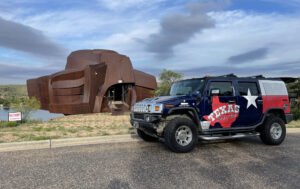 Lubbock – In the South Plains of Texas, the small lakeside town of Ransom Canyon is a refuge from the miles and miles of farmland. Just a few miles east of Lubbock, this lush little hideaway has some beautiful homes but there’s one dwelling that sticks out like a steel beam.

Since 1974, The Bruno Steel House has been a reliable relic here in Ransom Canyon because there simply is nothing else like it. “This particular house was built by Robert Richard Bruno. Started in 1974. He worked on it for about 34 years before his demise on December the 9th of 2008,” said caretaker Henry Martinez. 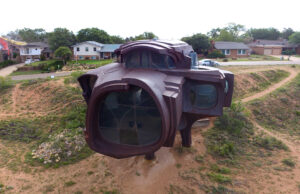 Henry took me on a tour of this mansion made from metal but first we had to iron out some details. “It’s been a structure known worldwide for its uniqueness. It’s hard to explain until you see it for yourself,” explained Henry.

Henry came to work for Bruno in 1986 and he inherited Robert’s businesses, a successful irrigation company. “To somehow end up owning a company is quite an honor. I don’t brag about it. I am very privileged and it’s because of Robert Richard Bruno. That’s why I feel that he’s an important part of my life,” expressed Henry.

While working with water brought them together, their joint love of art forged a friendship. “Art is like a hobby to me because of Robert. He taught me that. I love art. I enjoy painting. I enjoy drawing. Every time I walk in here, I see something different and that’s a long time, but it’s drilled on me, the importance of art,” said Henry. 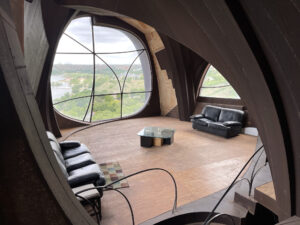 Every nook and cranny of the incredible work of art has a unique angle, a precious pitch, and curious corners. From the wild welds to stunning stained-glass fixtures, there’s all sorts of interesting aspects to the home. “It’s like trying to explain to you different pieces of paintings. They all have their unique qualities,” said Henry.

So do you measure this house in square footage? “There’s nothing square about this house,” stated Henry.

According to Henry, the Bruno Steel House consists of 2200 feet of space and 110 tons of steel.  Despite the metal being cold and hard, there’s something about the rust-colored creation. “There’s almost life to the metal. I don’t know how to explain it. It’s maybe sound kind of loony but to me it feels like there’s some life to it,” expressed Henry. 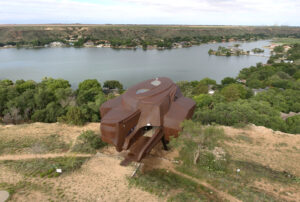 Seeing the people light up when touring this art installation that happens to be a home has been Henry’s biggest joy. “It’s so gratifying seeing the faces of different people. You got art people, you got welding people, you got architects, you got normal people, you got kids; youth, and they all have a different expression, that it’s hard to explain to you the differences on the different faces, and that’s been part of the fun,” said Henry. 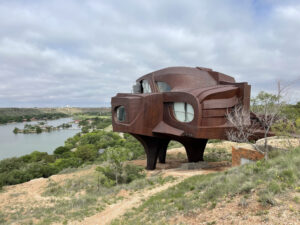 Henry has been giving tours of the home since Robert passed away in 2008.  Robert did get a chance to live in the home he built for about 7 months. But in the Fall of 2021, the Bruno Steel House was sold with plans of making it and a place for visitors to rent and stay for the night.  Our tour with Henry was one of the last opportunities he had to walk around the home that reminded him so much of his old friend. “He won’t be forgotten because to me, he lived a very beautiful work of art, he cared about education. He cared about art. He cared about people,” expressed Henry.

So if you happen to make your way to the south plains of Texas and you randomly find your way to Ransom Canyon, stop by the Bruno Steel House to see what 110 tons of art looks like because it’s an extremely unique stop on The Texas Bucket List. “You explain to me where in the world you’re going to see something like this. There is not,” stated Henry.