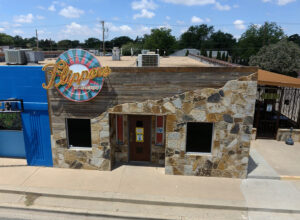 Lubbock – When you come across a place called Flippers, you’re not sure exactly what’s flipping folks’ lids in this place. That is until you walk in to see the plethora of pinball.

“The first day that I walked in here, I was just like, “This is like the coolest place ever,” said customer Ashly Ponce.

“It’s such a cool thing,” said another customer Kylie Dixo.

The sound of flippers at Flippers is a normal thing around here. “It’s like white noise. I don’t even know it’s there anymore,” said General Manager Simone Cee.

Simone has been flipping tables at Flippers since 2015, she’s originally from Seminole but has worked in restaurants around the country, including what some consider the happiest place on earth, Disney World. “I worked at the German restaurant in Epcot,” Simone said.

Simone came back home and found Flippers, a fine establishment known for two things. “Have you seen this place,” joked customer Andrea Stone. 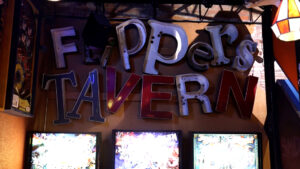 We’ve already pinned down one of them. The other? “Our hot dogs, of course,” stated Simone.

“A pinball restaurant with gourmet hot dogs. Where do you hear that,” said Ashly.

“I was super intrigued, because from the get-go it was gourmet bratwurst,” stated Simone.

“When I first came here, I was like, ‘Wow, these are fancy hot dogs.’ I mean, I had had hot 7-Eleven hot dogs. I thought that was top notch. But this place does something else,” explained Chef Briana Upton.

“The gourmet hot dogs, and you can’t get better than that,” stated Ashly.

“The things that this kitchen has come up with have been out of this world. Does not belong in Lubbock, at all. So it’s nice, coming from a culinary standpoint, to do fun stuff and not just a plain chili cheese dog,” said Briana. 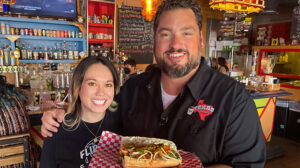 With so many out of the ordinary offerings at Flippers, I was flipping out trying to figure out which one I should try, but once Simone told me about the “Take Bahn Me” dog, I was like, A-ha! “I don’t know what Bahn mi stands for, but it’s a big hit,” said Briana.

Brianna got us started on this curious creation that’s not your average dog. “We all put our creativity, ourselves into it. We collaborate. We’re all fun people having fun,” Briana explained.

And so am I, especially when you can throw in some 80’s references.  Unfortunately, Brianna didn’t understand my references to the 80’s classic, “Take On Me” by A-ha. I am officially the old guy in the room, because that A-Ha moment may not hit everyone. “Oh. Well, it just went over my head. I’m too young for that,” joked Briana. 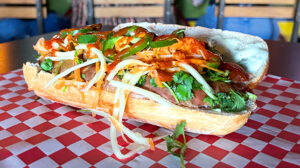 Let’s make a hot dog. Briana then gets some large hoagie buns and toasts them to perfection. Then comes the weenie which happens to be a combination of, green curry, coconut milk, and pork. “People come in and we tell them, ‘It’s Thai coconut curry.’ And they’re like, ‘Eh. I don’t think so. We’ll bring one out, test it out. If you like it, we’ll make you a dog with it. If not… And it’s always a yes,” joked Simone.

Back in the kitchen, Briana finishes preparing my hot dog by topping it with pickled vegetables, jalapenos, sriracha sauce, and some Thai basil mayonnaise. Quite the list of flavors that I cannot wait to taste.

The smell on this is unreal. It smells like the freshest hot dog I’ve ever smelled in my life, and I am going in for a bite. The sausage has a sensational flavor. It’s not overpowering at all. It is clean. It is fresh, and it’s perfect for the palate. The jalapenos add a great little hint of spice, but then those pickled vegetables, along with the cilantro, really blend together perfectly with that green curry brat, bringing out some bold flavor. 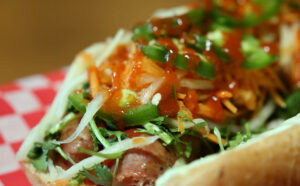 “I’m a picky eater. So I started slow with some of the more, just basic ones. And it’s actually made me open up a lot more and try new things,” said Kylie.

“That’s my favorite. Just the pickle. Everything. You get the sour. You get the meat. It’s awesome,” said Andrea.

Those jalapenos are starting to kick in. That’s when you know they’re hot and spicy, when you start getting the hiccups… the spicy hiccups.

“Oh, yeah. That would probably tear up my stomach. That’s a lot of spicy,” joked Ashly.

Yeah, this really shouldn’t be in Lubbock.

“Any time anybody comes in, they’re like, ‘Oh, this belongs in Austin.’, you’re like, ‘It could go to Austin, but it belongs to grand Lubbock, so.’,” explained Simone.

“So, being from Lubbock, everything’s kind of the same, and just here, it’s just so different. You don’t feel like you’re in Lubbock. It totally has that Austin vibe,” explained Andrea.

Well, if finding unique flavors is what you’re fond of, look no further than Lubbock for the Take Bahn Mi, an incredible take on an incredible hot dog. And well worth a stop on The Texas Bucket List.

“When people go out of town, they don’t want to go to restaurants that they have in their own town. They want to see something different, and this is definitely the place to go,” said Ashly.