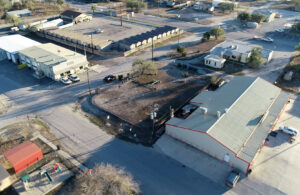 Tilden – The landscape of McMullen County is what you’d expect in south Texas.  It’s a desolate land covered in mesquite, brush, and the occasional cactus. Tilden is the county seat of this sparce part of the state, and it happens to be in the 5th   least populated county in Texas.

“The population’s about 800.” The whole county? “The whole county.” Wow. “Yes, that’s correct.” You’re not kidding. There aren’t- “No, there’s not. And about 1,160 square miles, so it’s a big county with few people,” said McMullen County Judge James Edward Teal.

Teal is a 5th generation Texas who was raised in this rustic region.  James has served as the County Judge since 2010. “Every ounce of soil that’s in this county, I have a huge fondness for,” James said. That includes the old cemetery located right outside of his office in the center of town. Contrary to most historic cemeteries, this graveyard isn’t grandiose or even of great notoriety. 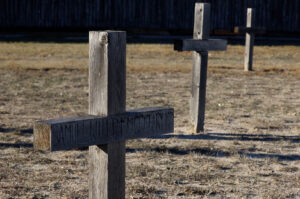 The Boot Hill Cemetery was established in 1858 and has become an odd sight given the town has grown around it. According to James, “McMullen County, and Tilden especially, were on a trade route from San Antonio to Laredo and a lot of shady characters came around. There were a lot of people that were killed under mysterious circumstances, or by murder.”

When asked why it’s called Boot Hill Cemetery, James said that the story he was always told is because men died with their boots on.  Assassinations, gun battles, cholera, and being thrown from a horse were the ways of the west back then. Not so peaceful endings! 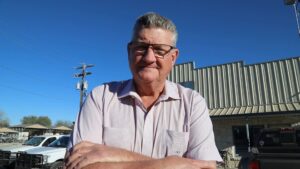 “A lot of them were killed on the streets, and one of them killed because he was wearing a top hat and a guy thought that he could shoot a hole in the top hat, and he ended up shooting the guy in his tracks and killing him. He’d had a little too much to drink. So that’s the story that floated around here, anyway,” said Teal with a chuckle.

There are some more established grave sites that are obvious for a reason. “What I’ve been told over my lifetime is that these graves that are covered with concrete and rock were actually graves of people that had died of cholera,” James said. “The residents were definitely afraid of the spread of cholera, so they covered the graves in hopes that the cholera wouldn’t leach through the ground.”

We also saw a grave site that was the most pronounced grave in the site, and it was very different from the rest. With a massive solid slab gravestone surrounded by a rusted iron fence, it’s the most ornate grave on the grounds. “This young man died in a horseback accident. He’d fallen off a horse. And whenever news got back to his family, his family actually shipped this wrought iron fence and the granite covering,” Jim explained. “The young man’s name was Greer. I think he was 25 years old or so when he passed, so this is a permanent monument that his family set up for him. And it’s been right here, of course, since he was buried in 1874.” 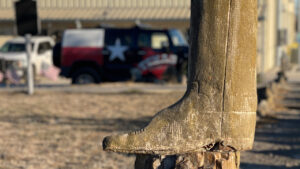 Now in their eternal rest, these pioneers have put Tilden on the map in a unique way, by kicking the bucket with their boots on. James noted, “it’d be very, very interesting to know the real truth. What the real truth is, and how accurate our stories have been passed down. It would be great to know that.”

If you’re interested in old lore and tales of Texas, the Boot Hill Cemetery is well worth a stop on The Texas Bucket List!